Roche’s Londis Doneraile was recently awarded the Community Store of the Year at this year’s Ireland’s Forecourt & Convenience Retailer Awards. 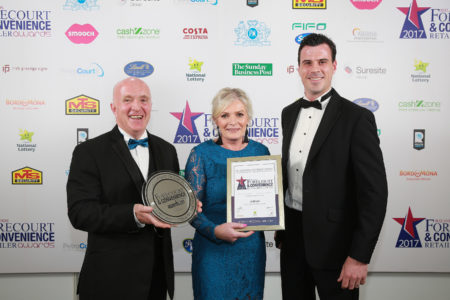 The event took place at the Clayton Hotel on Burlington Road, Dublin. Now in their 16th year Ireland’s Forecourt & Convenience Retailer Awards celebrated the finest retailers from across the island. It is seen as a pivotal event for the Irish retail industry, acting as a benchmark of excellence for the sector and a key driver of innovation.

Speaking on the night of the awards, owner of Roche’s Londis Doneraile, John Roche, said: “This is a fantastic award, not just for us, but for the locality. Our store is a rural shop, so we work hard to support all the local teams, charities and events in the area.

“There is a huge amount of community spirit in our store, where customers come in for a chat. We’re the third generation to run this store, and the fourth generation is on its way, so we’re delighted to have won recognition for the store and the contribution it has made to local life.”

They have also carried out fantastic work raising money for Pieta House both locally and nationally, and were instrumental in setting up and taking part in the Londis Climb for Joy event earlier this year that raised over €100,000 for the charity. They already have plans for a Londis Cycle for Joy event for 2018 with a target of €150,000 in the pipeline.

Roche’s Londis is a family run convenience store and forecourt. They provide a full range of services including ATM, Bill Pay, Lotto, Off- Licence and Seattle’s Best coffee-to-go. They also specialise in fresh foods with their award winning Bia Blás delicatessen and recently added their own bakery concept “Bacus Dhunaraill”. They employ thirteen full time staff from the locality.

Bill Penton, publisher of Ireland’s Forecourt & Convenience Retailer, welcomed the calibre of support and entries for this year’s awards.

“These awards are an important institution for the industry, and the calibre of entries and people who attended the event is a reflection of the strength of not only the awards themselves but of the industry in general. It’s an honour to have the opportunity to celebrate some of the most significant players in Irish business and see many of them give their support to these fantastic awards,” he said.