Those of us who are not interested in Horse Racing usually only hear about Cork Racecourse Mallow when it’s flooded, or some other disaster takes place. Two weeks ago there was a fire in a pub near to it, which made headlines, but we really all should pay more attention to this wonderful facility.

It was previously known as just ‘Mallow Racecourse’, and was more recently rebranded as “Cork Racecourse Mallow” It is a circular flat right-handed track 10 furlongs in the inner circuit and 12 furlongs in the outer circuit. It holds flat racing and national hunt events all year round.

The course hosts around 20 race meetings January right thru to December.

The National Hunt track is a flat right-handed oval track approximately 1 mile 4 furlongs long. The chase track runs around the outside and with the hurdle track running inside.

There are 8 fences on the chase track circuit, 6 regulations, and two ditches. This is a flat testing track with few places to hide. 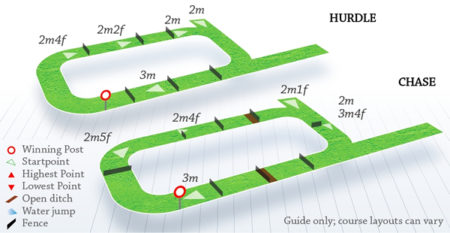 The Flat track is made up of two parts. The round track is a flat right handed oval approximately 1 mile 4 furlongs around with more than 3 furlongs in the home straight.

There is also a flat 6 furlong straight sprint track finishing closest to the stands.

Back in March 1983 the racecourse made its way into international headlines when it was used by a private jet for an emergency landing. The owners/insurers of the plane later paid for a tarmac surface to allow the repaired plan take off several weeks later.

The track is located on Killarney Road, Mallow, Co Cork.

Other meetings in the UK and Ireland