In order to carry out this real-time Earth-to-space radio contact, the students created their very own temporary radio station on the campus to beam a line-of-sight signal to the ISS, which included an antenna, two radio systems and a back-up line diverted via Europe, in case of interference locally. As if this feat of engineering was not impressive enough, in order to allow another international school to take-part is this momentous occasion, Glanmire Community College, from their temporary radio base at the school, bounced their signal off another satellite to allow the Romanian school, Calistrat Hogas located in Piatra-Neamt to take part in this contact.

The countdown for the event began with an ‘out of this world’ performance of Vivaldi Concerto for Two Cellos in G Minor by the Glanmire Community College Quartet, with performances later in the event from the school choir. Their heavenly sounds were an ample kickstart to this event. The entire student body of over 1,000 students all embraced this amazing opportunity, and in their own ways contributed to enhance this experience. The multimedia students had the entire auditorium laughing with their fantastic short video entitled “Space Thingy”, while 6th year student Zoe Littlejohn was announced the winner of the Merck Science of Art Competition for her cosmic piece Peering Through From The Past.

At approx. 10.54am, it was time for blast-off. Lead by Séamus McCague, National Co-Ordinator for the ARISS programme, contact was attempted with the ISS. “OscarRomeoFourIndiaSierraSierra this is EchoIndiaOneIndiaSierraSierra can you copy us over?” was uttered across the airwaves as the students waited in anticipation for their first inter-planetary conversation. Quiet fell over the onlookers for a nail-biting 2 minutes as they tried to get a connection with Acaba. Thankfully after the fourth attempt to reach space, the faint voice of astronaut Joe Acaba could be heard coming through, which after a few seconds could be heard loud and clear by the jubilant group.

This contacted lasted for 10minutes in which the schools entire planned 20 questions could be asked and answered. Glanmire Community College and Calistrat Hogas in Romania took it in turns to question Joe with Josef Coy (aged 14), a 2nd year student in GCC taking to the microphone first. There were five GCC students altogether who asked two questions each on behalf of their fellow students; 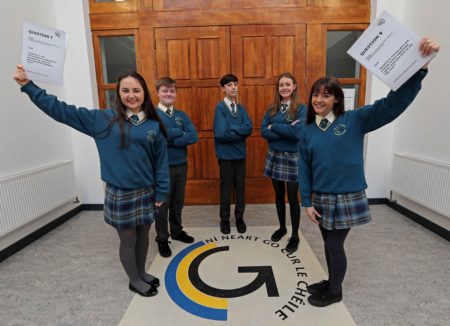 Lucky students, Jade Lagrue, Fergal Buckley, Josef Coy, Anna O’Connell and Ruth Whelan, with their questions for astronaut Joe Acaba, pictured in Glanmire Community College as the school made history as some of the first Irish students to make direct contact with an astronaut on the International Space Station (ISS) as it orbited the Earth via Amateur Radio.
Picture: Jim Coughlan.

There were a great mix of questions asked ranging from technical topics such as that asked by Fergal “Does the ISS send information in real time to help to track storms? “, which Acaba answered, “We do have real time information going back. We have some experiments that are doing that. And then the astronauts, we also take pictures to help to track the storms”, to more fun and human-interest queries such as Ruth Whelan’s question, “Is it hard to sleep in space as you float, over”? Many students might be hoping to make the trip to the ISS to try out these living conditions as Acaba commented, “It’s actually very nice to sleep in space. We have a sleeping bag that you can attach to the wall or sleep in your little crew quarters. But it is actually very comfortable sleeping in space. Over.”

While the men and women who take to space are extremely brave, Joe Coy revealed a weakness when it came to testing the limits of the American’s tastebuds “I read your sense of taste changes on-board the ISS. Does that mean you could eat the hottest pepper on earth, over?”. Chuckling Acaba commented, “That’s a good question too. For some people it definitely does, for me not a whole lot, but I don’t think any of us want to eat the hottest pepper on earth, that sounds too painful!”

When questioned about Mars, Acaba left a room of dreaming students with the following wish, “I think it’s going to be a while before we get there, but hopefully, one of you will get the opportunity.”

Speaking after the highly-anticipated event, Principal Ronan McCarthy said: “I have never experienced such a buzz around the corridors of our school. You could have heard a pin drop as each and every student was at the edge of their seat hanging on the every word of astronaut Joe Acaba. I am so proud of all my students and the staff here at Glanmire Community College for making this once-in-a-lifetime event a reality. We are extremely proud of our STEM programme in the school and this is just one highlight of this. We have taken our place in history, and I know the students will be telling their children someday about their unforgettable experience this morning.”

There was supersonic work undertaken by the students to make this event possible, but it would not have been possible without the assistance from other partners including Cork Education and Training Board, The National Space Centre, Blackrock Observatory and ARISS.