WEST CORK: US radio station ‘Lite Rock 105’ travels to Kinsale for outside broadcast

One of New England’s most popular radio shows is being broadcast live from Kinsale today (Thursday, 9th Nov) and tomorrow (Friday, 10th Nov). Lite Rock 105’s Stephen Donovan and Heather Gersten, presenters of its morning show, have been taking to the airwaves from The Blue Haven Hotel in Kinsale to promote tourism in Cork and the surrounding counties in the Rhode Island and New England areas. The broadcast is part of a marketing campaign backed by Cork Airport, Tourism Ireland and Norwegian to support the new direct transatlantic route from Cork – Boston/ Providence to the American market. 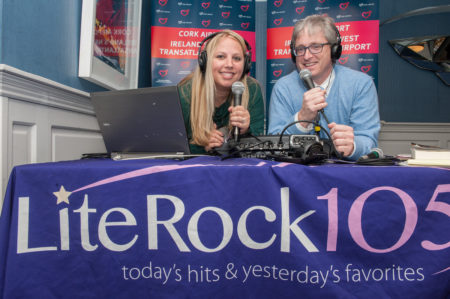 Stephen and Heather, who have over half a million listeners each week, have a packed schedule of guests from some of the top tourist attractions in the region. They will hear from The Wild Atlantic Way, Blarney Castle, Fota Wildlife Park, Spike Island, The Jameson Distillery and the Titanic Experience as well as Crawford Art College and West Cork Farm Tours. A full itinerary has also been compiled for the presenters for when they are off-air to ensure they get to experience first-hand the very best that Cork has to offer. Stephen is no stranger to Cork; his grandparents are from Bere Island in West Cork and he visits his relatives there regularly. While Heather has been Ireland previously, she has only had a small taste of the local hospitality but is really looking forward to exploring and meeting local people.

Kevin Cullinane, Head of Communications at Cork Airport said: “Lite Rock 105’s Stephen and Heather broadcasting live from Kinsale is a unique opportunity to promote local tourism to a significant number of potential visitors from the greater Boston area. There are some very interesting guests for the duo to talk to live on-air with the single-minded objective of putting Cork firmly in the minds as a must-see destination and as the gateway to the Wild Atlantic Way and Ireland’s Ancient East.

“The partnership with Lite Rock 105 is just one element of a new marketing campaign that we have launched in conjunction with Tourism Ireland and Norwegian to drive awareness of the direct transatlantic route into the heart of the South of Ireland. We have an abundance of fantastic attractions, restaurants, hotels and pubs and we’re pushing hard to increase visitor numbers, while also enticing them to stay in the region helping to boost the local economy. Last year, over 1.8 million visitors from North America came to Ireland. Now that we have direct access into Cork and the surrounding counties of Kerry, Tipperary and Waterford, we must do our utmost to attract as many of these as possible; it really presents a fantastic opportunity to support tourism and trade in the region,” he added.

The marketing campaign also includes advertising across the three main radio stations in New England, targeted social media and promotional engagement with tour operators in the US. Cork will also welcome a number of key media and bloggers from Rhode Island over the coming months.

The marketing campaign, supported by Cork Airport, Tourism Ireland and Norwegian, is running throughout November and December.

GONE FISHING: EU Fisheries mission is certain sure to visit Cork in 2018
Previous Post
EXTRA, EXTRA…. READ ALL ABOUT IT! Cork County Libraries to benefit from €72,122 investment