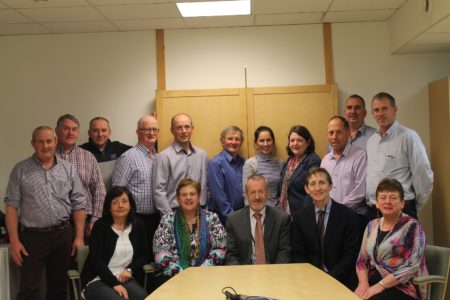 Seán Kelly MEP and Leader of Fine Gael in the European Parliament hosted a group of constituents from Ireland South, including a large group of farmers and IFA Members from Cork, in Brussels this week where they enjoyed a tour of the EU Parliament and Commission.

The visitors received an update on Brexit talks and the potential impact on Ireland, plans to reform the Common Agricultural Policy, energy and climate change policies, fisheries, Erasmus+ and much more.

The group also met the European Commissioner for Agriculture, Phil Hogan, at the Commission building the Berlaymont.

“Although I spend 3-4 days a week in my constituency, the other days in Brussels are filled with legislative activities, various meetings and sessions. Therefore, it was a pleasure to have my constituents experience this aspect of my work as well.

“We have been discussing Brexit and its impact on Ireland, data protection and cybersecurity, national and international trade developments, among other things. I am very grateful to the group for coming to visit Brussels and spend time in the European Parliament this week, and I hope that their time here was as much of a pleasure as it was for me to host them,” Mr Kelly said.