Gaisce – The President’s Award is a direct challenge from President Michael D. Higgins to young people aged 15-25 to dream big and realise their potential, push their boundaries and develop skills which will stand to them throughout their lives. This year’s Gold Awardees have successfully completed five challenge areas for 52 weeks or more – volunteering with a charity or community group, developing an existing skill or learned something new, became more active through sport or exercise, took part in a four-day adventure journey discovering the great outdoors as part of a team, and broadened their horizons on a five day residential stay away from home. All Awardees previously received the Gaisce Bronze and Silver awards. 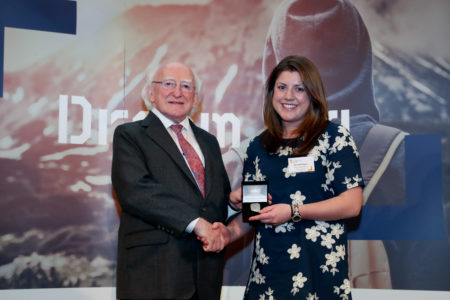 Highlights from some of the Awardees’ Gaisce journeys include:

Jessica O’Brien went on an adventure journey to Castlebar in Co. Mayo at Lough Lanna, and supported Meals on Wheels for her community work where she continues to volunteer.

Tracey Prendergast started to practice yoga for her Physical Recreation, took part in the Castlebar International Walking Festival for her Adventure Journey and her Residential Project brought her to Doolin, Co. Clare where she spent time exploring the Ailwee Caves and meeting a few birds of prey.

Shane O’Shaughnessy decided to take on basketball for his Physical Recreation , he joined the Charleville Men’s Shed for his Community Involvement. Drama was his Personal Skill and he contributed to the show ‘High School Robbery’ developing ideas, writing the script, producing and performing in the show.

Eimear Kavanagh learned how to cook for her Personal Skill, went to the gym for her Physical Recreation and volunteered with the Order of Malta for her Community Involvement.

Conor Crowley ran the tuck shop in Bonnington Training Centre for his Community Involvement, was a member of Sunday’s Well Rebels, a mixed ability rugby team, for his Physical Recreation and went to Doolin, Co. Clare for a cultural week as part of his Residential Project.

Jack Cowhig got involved with his school’s Young Rotary Club for his Community Involvement. He was given the title of Senior Officer due to his previous experience with the club and he was responsible for working on new charity events. For his Personal Skill Jack learned Chinese and this linked in with his Residential Project as he spent three months in China. For his Adventure Journey, Jack cycled part of the Camino de Santiago.

Thomas Brooks became a crew member for the Youghal RNLI Station for his Community Involvement and the sailing theme continued for his Physical Recreation where he practiced sailing. For his Adventure Journey he took part in a four day sailing trip starting from Youghal and finishing in Baltimore.

Khadija Bouncir’s Personal Skill was big challenge as she had to learn to travel independently around Cork city. For her Physical Recreation she learned to dance and starred in a show called ‘Winter Moves’. For her Community Involvement she became a Scout leader with the Doyle Road Scout Group.

Martina Hayes learned how to knit for her Personal Skill, went to the Gaeltacht in Connemara for a week for her Residential Project and for her Adventure Journey she went with the Gaisce Society in CIT and hiked the Kerry Way trail. She believes Gaisce encouraged her to use her time wisely and become more involved in her community.

Jeremy Murphy learned how to travel independently for his Personal Skill, learning how to use the bus by himself. His Adventure Journey brought him to Castlebar for the International Walking Festival and for his Community Involvement his volunteered at the Cork SPCA .

Special Guest, President Michael D. Higgins addressed the audience during the ceremony “It gives me great pleasure to be here with you today to recognise the dedication, perseverance and generosity of our Gaisce Gold recipients, and to present 55 talented young people with their award. Today marks the conclusion of a journey – a journey in which you tested yourselves, through your thoughts and actions, first discovering and then surpassing your own limits. It was a journey in which you demonstrated not only a personal determination, but also a commitment to the service of your communities and of your fellow citizens. Today is a day on which you, your families and friends, your teachers and mentors, and all those who helped you on your path to the Gold award, can justly feel very proud of your accomplishment.”

John Concannon, Chairman of Gaisce – The President’s Award said “I would like to congratulate all of those receiving their Gold Awards here today. They should be proud of all they have learned and achieved. I think it’s fair to say that the future of our country and communities will be in safe hands if these young people are leading it.”

Yvonne McKenna, Chief Executive of Gaisce – The President’s Award said: “Gaisce truly is a national treasure: helping thousands of young people each year to dream big and fulfil their potential. I congratulate this year’s Gold Awardees who have shown determination and commitment to achieving their awards and it is only right they are celebrated here today in beautiful Dublin Castle, with all the pomp and ceremony that goes with it. With many young people possibly feeling a little lost in their lives today, Gaisce – The President’s Award is a vital framework which gives young people a voice, confidence and self-belief through their achievements and goals. Today’s Gold Awardees aren’t only incredible ambassadors for Gaisce, but also their families and our country.

We applaud, too, the commitment and dedication of the President’s Award Leaders (PALs) who mentored the young people through their Gaisce journey and to this special day. For many of the more than 30 organisations represented today, this is their first Gaisce Gold. A huge thank you to all the organisations and the PALs for supporting young people to dream big and fulfil their potential through Gaisce – The President’s Award.”

25,000 young people registered to take part in 2017 and Gaisce’s aim is that 35,000 young people will register each year by 2020, the 35th anniversary of Gaisce, so that every young person has the opportunity to participate in the programme and realise their dreams and ambitions.