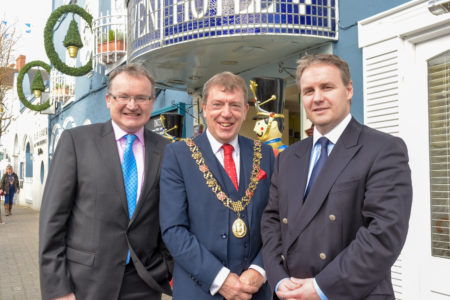 The Blue Haven Hotel was the venue for the annual Fitzgerald & Partners Accountants – Kinsale Business Christmas lunch which was attended by the Kinsale business people and stakeholders from SMEs, start-ups and large employers in the area.

Always a popular event. It was attended by the Lord Mayor or of Cork, Cllr. Tony Fitzgerald who addressed the business community in a well-received address amongst many of the guests including Senator Tim Lombard, Margaret Murphy O’Mahoney TD and Minister Jim Daly T.D. with the guest speaker, leading economist Jim Power.

The Lord Mayor congratulated Fitzgerald & Partners on their initiative promoting enterprise and business in the Town with Doingbusinessinkinsale.com which has been widely recognised and received, recently launched by An Tanaiste Simon Coveney T.D.

There was a full to capacity lunch, sponsored by AIB Bank Kinsale and the address by Jim Power. He spoke of Brexit, the threats and opportunities in 2018 and the implications for Kinsale and surrounding areas in a very well received presentation.

“The past year has been another good one for the Irish economy. The international background has been as good as we have seen in a decade, notwithstanding the uncertainty created by Brexit and Trump.

Outlook for 2018 good. Global economy getting steadily better; and domestic momentum very solid as we turn towards the new year.

The domestic agenda will be dominated by Brexit, the lack of housing supply and the quality and quantity of public services. Strong political leadership and prudent economic and financial management will be need to steer the economy through these uncertainties.

Controlling all of the costs facing the business sector and credit availability for the SME sector are essential priorities. The outlook for the South West looks good with tourism likely to have another good year and the SME sector set to benefit from the ongoing improvement in consumer demand and generally stronger domestic demand. Brexit and associated sterling weakness will challenge the agri-food sector.” Jim Power.