The Cobh Municipal District – of Cork County Council – held a civic reception to honour the volunteers of Cobh and Glounthaune Tidy Towns Committees this evening. It was to mark their successes in the 2017 National Tidy Towns Awards.

Chairperson of Cobh Tidy Towns, Ruth Ring said “Cobh is now the proud recipient of 3 Gold Medals, 3 Silver Medals and 1 Bronze Medal in the National Tidy Towns Competition. In 2017 Cobh retained its Gold medal that it had won in 2015 and 2016 with 323 points placing only 8 points behind the National winner, Ennis. Cobh also won an Irish Water award in 2016 in the Best Large Town Category. Cobh has been involved in the competition 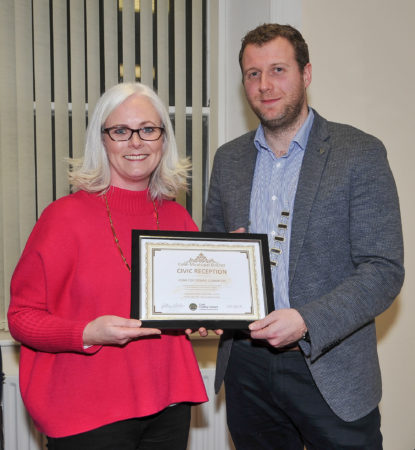