Crosshaven RNLI volunteers led an inter agency rescue this evening ( Thursday 22 February) after being diverted from exercise to a person who had fallen on rocks at Fountainstown and was found in a serious condition by a member of the public. 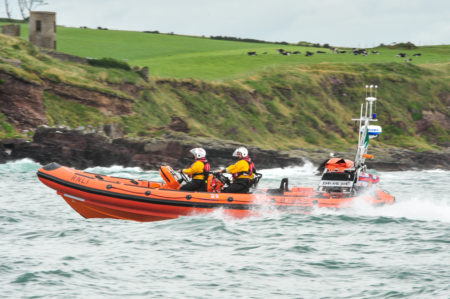 The lifeboat, commanded by Aidan O’Connor with Norman Jackson, Jenna O’Shea and Georgia Keating were only a few minutes from the incident when tasked by Valentia Marine Rescue centre, and were first on scene.

Due to darkness and a rocky shore, Aidan O’Connor elected to swim in to shore with the first aid kit. Aidan continued to administer first aid until members of the Crosshaven Fire service, Crosshaven Coast Guard and an ambulance arrived. After further medical intervention, the Casualty was then stretchered over the rocks to a waiting ambulance. The lifeboat returned to station at 10pm. We wish the casualty well.

Lifeboat Operations Manager, Patsy Fegan, said that “The casualty was extremely lucky to have been found by a member of the public. The outcome, if he had remained there overnight would be very different. Always tell somebody where you are going and what time you will be back.”