This year there will be a choice of two distances; a 25 km race starting at 9:30am from Cork City to Carrigaline and a 10 km race from Monkstown to Carrigaline starting at 11am. The run will roughly follow the route of the old Cork, Blackrock and Passage Railway line which ran from 1850 until 1932. The predominantly flat route passes through Blackrock, Mahon, Rochestown, Passage, Monkstown, Raffeen and Shanbally before finishing in Carrigaline. The 25K is an ideal event to test runners pace and fitness before the Cork City Marathon and the first prize in the male and female category is €300.00 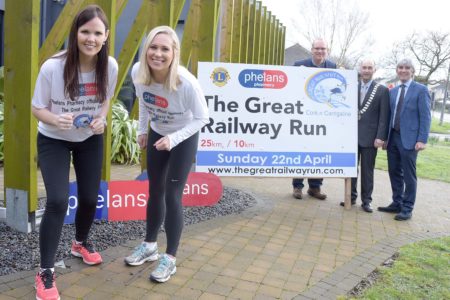 Speaking at the launch of the event Tánaiste Simon Coveney TD said “I’m delighted to be at the launch of this fantastic event which has grown from strength to strength each year. This race takes place in some of the more beautiful surroundings in Cork around the harbour area. Running has become hugely popular and I’d encourage everyone with an interest to come along and get involved in this worthy event which supports a very important local project here in Carrigaline.”

The main sponsor of the race is Phelans Pharmacy awarding €3000 in prize money for best overall placings as well as for age categories. Speaking about the event now in its sixth year Conor Phelan said “As a local business celebrating our 30th year in Carrigaline this year, we’re delighted sponsor the Great Railway Run, it is a great community health initiative and supports a worthy local charity”.

With the race growing in popularity every year, participants are encouraged to take advantage of early bird rates (which ends midnight 25/2/2018) of €18.00 for the 10K race and €27.00 for the 25k race. Online registration is now open but is limited to 1000 runners for each distance. All participants must pre-register either online or by post before midnight on Friday 20th April 2018.

The Joe West perpetual trophy will be awarded to the fastest male and female in the 25K race. More detailed information is available on the website; www.thegreatrailwayrun.com and on Facebook; @TheGreatRailwayRun