BUSINESS SURVEY: Cork meetings are quicker and have less attendees 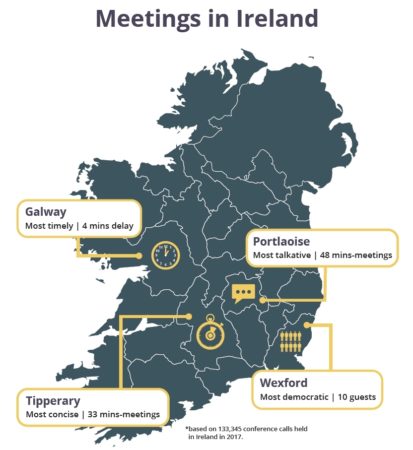 Tuesday is the best day for a meeting, late in the morning, but keep it less than 35 minutes. €1,123 is the cost of tardiness to meetings per employee per year and remote working is becoming the new norm in a mobile-first world according to new research by Irish conferencing services company 247meeting based on 133,345 conference calls held in Ireland in 2017.

Tuesday is the best day for a meeting, late in the morning, but keep it less than 35 minutes. €1,123 is the cost of tardiness to meetings per employee per year and remote working is becoming the new norm in a mobile-first world according to new research by Irish conferencing services company 247meeting.

New research by Irish-based company 247meeting based on 133,345 conference calls held in Ireland in 2017 suggests conference call meetings are starting approximately 12 minutes late, with six people on each call. Based on Ireland’s average annual full-time salary of €45,000 in 2017, lost productivity costs an organisation €1123 per year per employee.

The new white paper by 247meeting reveals some very interesting findings on a local level also. On average, Cork meetings wrap up quicker in 37 minutes with only 6 attendees. The study suggests that since it’s difficult to make decisions by consensus in larger groups, it makes sense to limit the number of people in meetings. Ideally, there should be no observers; everyone in attendance should be there because the meeting is relevant to them and because they have something important to contribute.

Conformity tends to increase when more people are present, but there is little change once the group size goes beyond four or five people. Conformity increases when other members of the group are of a higher social status. When people view the others in the group as more powerful, influential, or knowledgeable than themselves, they are more
likely to go along with the group. We can conclude from this that many junior staff members might be reluctant to contribute in a meeting where their managers are making decisions. Therefore, senior leaders should ensure that those who do attend meetings have the right level of knowledge and skills to contribute, and that they feel empowered to speak up.

Connaught professionals are overall more verbal than the other provinces with an average of 41 minutes spent on conference calls versus 37 minutes for Munster and Leinster. They also usually invite more people to their meetings than their neighbours; an average of 8 people attend in Connacht versus an average of 6 people in Cork and Munster. The national average is 5 minutes delay for a 37-minute conference call with 6 participants.

The report and abundance of research also concluded that:

The most productive meetings happen late in the morning.
Tuesday is the best day to hold a meeting for maximum impact, and if the purpose is to make decisions, the fewer people on the line the better.
In line with the human attention span, it is advisable not to schedule hour-long meetings. The best meetings are kept to around 35 minutes and an absolute maximum of 45 minutes.

One thing that seems very apparent from this research is that meetings by conference call seem to wrap up quicker at 37 minutes than face-to-face meetings which are normally scheduled in for an hour. This doesn’t take into account the time it takes to get to and from the meeting. Now with an ever-increasing number of people working remotely, the conference call is becoming more popular than ever. But factor in the cosmic rise and dependence on smart phones and a whole new solution to meetings is born. Irish conferencing services company, 247meeting has now launched a pioneering new mobile app, allowing worldwide users to hold confidential remote meetings on the go – anywhere, anytime, with less than two minutes set up. The 247meeting mobile app is available in Apple and Android versions and can be downloaded free of charge from the iStore or Google Play. To watch a demo, go to https://247meeting.com/mobile/ or to view the full white paper on the research, click https://247meeting.com/time-is-money