A busy young personal trainer from Co Cork won €23,000 on the National Lottery Winning Streak game show on RTE One last Saturday (14th April) and plans to put his winnings towards building his own business. 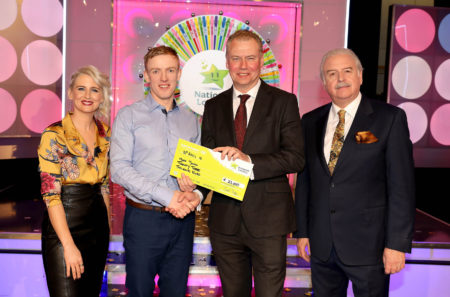 Mark Tynan from Blarney Street, Cork City is a busy personal trainer who works two jobs. By day he is the duty manager of Source Health & Fitness club in Cork and in addition he has his own clients with another gym in Cork, Alan Murray Fitness in Ballincollig.

Described by Winning Streak presenter, Sinead Kennedy, as “Corks busiest man”, Mark (24) has the ambition to one day own his own fitness business and is certainly putting in the hard yards now, getting experience in the management side (with his day job) and the personal training side, working with 20 of his own clients.

As well as investing in his livelihood, Mark revealed that he is going to look after his sister, parents and grandmother with his winnings.

It was his grandmother that Mark had to thank or his Winning Streak appearance. She was the one who bought him the scratch card and sent it in to the National Lottery for him. His gran, Ann Higgins and his mother actually Lisa won a trip to San Francisco in 2014 on Winning Streak scratch cards. The pair jetted off to San Fran with Marty Whelan and 42 other people in 2014. All his family supported him from the RTE audience along with his girlfriend of two years, Chloe.

Winning Streak scratch cards also offer players the chance to win a once-in-a-lifetime luxury cruise for two worth €5,000. To enter the draw for the Luxury Cruise for two, entrants must collect the 3 letters S-E-A from the stub portion of their Winning Streak scratch card and send those into the National Lottery in the special grey stub envelope which are available from National Lottery retail sales agents. The winner of this week’s cruise is Julie Wolohan from Midleton, Co Cork.

The Winning Streak TV Gameshow is based solely on chance and there is no skill involved. To enter, players must submit a 3-star ticket in one of the special 3-star envelopes, which are available from all National Lottery Retail Sales Agents. On the Thursday preceding the gameshow, one hundred 3-star entries are drawn randomly in a preliminary draw that takes place under strict security controls in National Lottery offices. From these 100 entries, the five players for the following show are drawn and their names are featured on the gameshow.