8 May 2018
By Mary Bermingham
mary@TheCork.ie

Alex O’Shea, better known as the Guinness Book of Records holding “Running Fireman” launched this years annual Cheetah Run which is hosted by Fota Wildlife Park in conjunction with Eagle Athletic Club. The Cheetah Run, a race run over 5 kilometres for adults and now also a one-mile race for younger runners, will take place on Thursday 17th May and online registration through the Eagle Athletic Club website will open on Thursday 3rd May. Fota Wildlife Park, a not for profit organisation, donates 100% of the funds raised from the yearly race to conservation projects such as re-introduction programmes for the White-tailed eagle to the Golan Heights in the Middle East and European Bison to Poland and Romania. 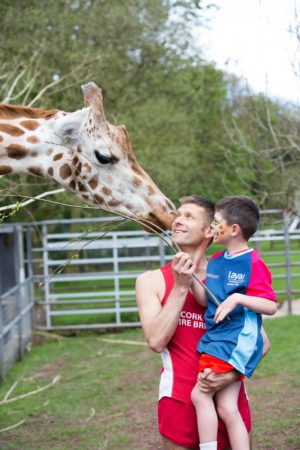 Alex O’Shea, The Running Fireman with his son Dylan with a Rothschild Giraffe at the launch of the Cheetah Run which takes place on Thursday 17th May in Fota Wildlife Park.
Photogrtapher: Darragh Kane

Alex O’Shea said at the launch “Athletics has been a part of my life since I was a young child and it’s great to see that Eagle Athletic Club and Cork’s own Fota Wildlife Park are encouraging younger people to run and take exercise. This is an unusual and unique race and at only 5k there is no excuse for anyone not to try it! He continued: “As big lover of animals I was delighted not only to be here at the launch but also to discover that all of the profits made are used to directly fund animal and bird conservation worldwide.” Alex O’Shea holds the Guinness World Record for his time ran in Photographer Marathon wearing a full fireman’s kit including hobnailed boots. He is currently preparing to run 32 marathons in 32 counties in 16 days in aid of Guide Dogs for the Blind this September.

The Cheetah Run, sponsored by Laya Healthcare, John Buckley Sports and Brooks is one of the most unique races in Ireland which starts and finishes in Fota Wildlife Park, giving runners a chance to run past the giraffes, zebras, ostriches, Asian lions, Sumatran tigers and of course the eponymous cheetahs.

Sean McKeown, Director of Fota Wildlife Park said: “We are delighted to be able to host this event again this year, without fail Eagle Athletic run a family friendly race with a great atmosphere every year. Better still it helps us raise awareness and funding for our conservation work and projects that we support. One of our native species will directly benefit from the funds raised at this year’s race on the 17th May.’’

Registration opens on the 3rd May in two blocks at 10.00 am and at 7.00pm, costing €15 per adult runner and €8 per juvenile and entry is strictly on-line at www.eagleac.net. The juvenile race is open to those aged from 11 to 15 years of age. Due to its popularity, the registration usually sells out within a few hours.

The Cheetah Run adult race commences at 8pm and the juvenile race starts at 7.15pm on Thursday 17th of May. Each runner can bring a maximum of four visitors along with them free of charge to watch the race, each runner will receive four wristbands at registration which is open from 6.30pm on race night.