Blackwater Motors will be the official car partner for the Championships, which will tip off on June 26th and sees Ireland senior women’s team compete with Luxembourg, Norway and Cyrpus in Group B in the battle for European honours. 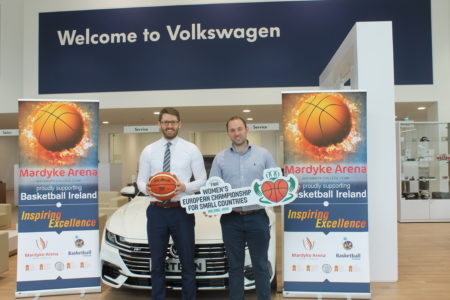 William Daly, Assistant Sales Manager at Blackwater Motors Volkswagen Forge Hill and Marketing and Quality Manager at the Mardyke Arena UCC, Wayne Falvey, pictured at the announcement of the partnership in Cork

Speaking about the announcement, William Daly, Assistant Sales Manager at Blackwater Motors Volkswagen Forge Hill stated: “Blackwater Motors are delighted to partner with the Mardyke Arena UCC and Basketball Ireland for this exciting event and to be official car partners of the FIBA European Championship For Small Countries. We look forward to the competition and wish all teams competing the best of luck.”

Also speaking about the announcement, Marketing and Quality Manager at the Mardyke Arena UCC Wayne Falvey said: “We’re thrilled to welcome Blackwater Motors on board as the official car partners of this year’s FIBA Women’s European Championship for Small Countries. We are delighted to get the support from a local Cork company, and we are looking forward to working with them as the countdown to tip off continues.”

Commerical Manager at Basketball Ireland, Conor Meany added: “We’re delighted to partner with Blackwater Motors for this summer’s European Championships and look forward to working with them in the coming weeks as we move closer to the event.”

There are a number of other partnership opportunities still available for this year’s championships. If you would like more information on these please contact w.falvey@ucc.ie or cmeany@basketballireland.ie