The beating heart of Cork Penny Dinners, the Queen of crime with more No. 1 original fiction bestsellers than any other author, and the power behind Other Voices are among those set to be honoured by UCC tomorrow (June 8). 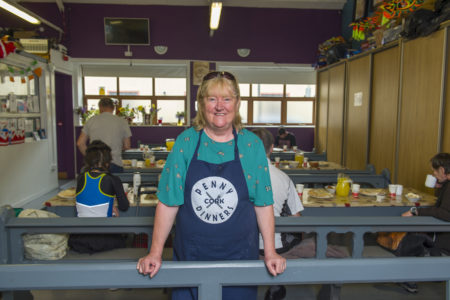 Caitríona Twomey, Cork Penny Dinners’ coordinator, who will be conferred with a Degree of Doctor of Laws said: “I believe education is a great equaliser; every day in Penny Dinners I learn something. I learn ‘We Are One’.

“When you have the great privilege of being of service to your fellow human beings when you are humbled by the kindness, generosity and caring of all who keep our doors open, it is then you understand life.”

With more than £63 million worth of books sold, making her the bestselling British-born female crime writer since Nielsen records began in 1998, Martina Cole was born and raised in Aveley, Essex, the youngest of five children in a large, poor Irish Catholic family.

At 21 Cole lost both her parents within six months of each other, and later that year started working on the manuscript of what would become her iconic debut novel Dangerous Lady, which caused a sensation when it was published in 1992. She won the British Book Award for Crime Thriller of the Year with The Take, which then went on to be a hit TV series for Sky 1.

On being conferred with a Degree of Doctor of Literature from UCC, Cole said: “I can’t put into words what a tremendous honour this is for me. My father was a Cork man – a merchant seaman – and I have loved books and reading since I was a small child. He brought home a cardboard theatre from his travels.

“When I opened the crimson faux velvet curtains, hidden behind them were the smallest books I had ever seen. The stories they contained were all old Aesop fables and fairy tales, and I was entranced.”

Cole is the undisputed ‘Queen of Crime Drama’ with 23 novels to her name, 15 of which have been No.1 bestsellers, and total sales stand at over 16 million copies. Cole’s career path was not an easy one; she finished school at 15 with no qualifications, married at sixteen and divorced a year later. At 18 she was a single mum, living in a run-down council flat, struggling to bring up her son Chris.

“Cork has always been my second home and to be conferred with this Honorary Doctorate in the presence of my family makes it an extra special day,” Cole said.

Musician, filmmaker and broadcaster Philip King created Other Voices, one of Ireland’s most unique music events billed as “a musical pilgrimage for the mind and the soul” at St James’s Church in Dingle in 2002.

The annual gathering witnessed its most dramatic evolution in 2012, as it branched out to Derry and London and became a globally-streamed event. Other Voices has attracted artists including Ellie Goulding, Amy Winehouse, Elbow, The National, Damien Rice and Snow Patrol.

King, who will be conferred with a Degree of Doctor of Music, has been involved with the arts in Ireland as a filmmaker and musician for over 30 years and has filmed every traditional musician of significance.

He has presented radio programmes including An Droichead Beo, The Green Groves and The South Wind Blows, and is contributing reviewer to the Irish Times. In 1997, King co-produced the soundtrack for the feature film This Is My Father and the following year directed The Joshua Tree, a Classic Albums documentary on the making of U2’s album of the same name.

Richard Langford, the former CEO of Cork City VEC for more than 25 years, will be conferred with a Degree of Doctor of Education. Langford has also served as CEO of Waterford City and as Chairperson of Waterford Institute of Technology (WIT), the NQAI, the Education Finance Board and the State Examinations Commission.

The former Director of the Crawford Art Gallery, Peter Murray will be conferred with a Degree of Doctor of Fine Arts. Over the course of three decades, firstly as curator and later as Director, he led it from a municipal art gallery to become a National Cultural Institution. As curator at the Crawford, Murray edited the first ever catalogue raisonne of the Gallery collection, detailing the paintings, sculptures and prints acquired since the early nineteenth century.