32 jobs created thanks to €11m investment 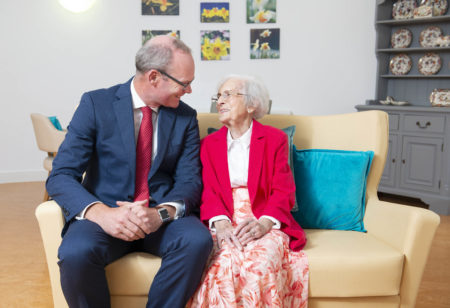 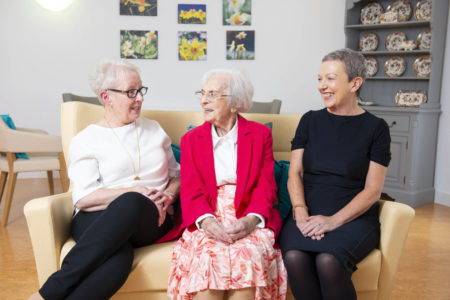 Maura Roche (100), a resident at Bon Secours Care Village, Mount Desert, Cork, photographed with her Daughters Susan Woodgate from Hamshire and Jill Potter Cogan from Ballyhaunis at today’s launch of a new 36 bed wing at the leading retirement villages.
Photography by Gerard McCarthy

Developed at a cost of €11m by Ireland’s largest private healthcare provider Bon Secours Health System, the facility brings to a total of 97, the number of private en-suite rooms now in place at the facility located just off Lee Road, Cork. The extension, which opened in June at full capacity, has created an additional 32 jobs at the Care Village, adding to the 70 already in place.

The investment has also seen the introduction of four newly refurbished enclosed gardens, lounges and seating areas with views over the Lee Valley for residents.

The development is part of a wider Bon Secours Health System investment programme that includes the recent opening of a state-of-the-art Cath Lab in Galway, a €77m development in Cork that will comprise a state-of-the-art radiotherapy centre in conjunction with the hospital’s partners UPMC and a new partnership and upgrade in radiology services in the Bon Secours Barringtons at Limerick.

Opening the new facility, Minister Coveney said: “Bon Secours has been operating here since 2002 and in that time has developed a reputation for putting its residents at the very centre of a very special, high-quality and caring service. That’s why the extension we are opening here today was a much awaited one and no surprise also that all 36 additional beds were occupied pretty much immediately. Our elderly citizens deserve this standard of care that the Bon Secuour and others across the country provide.

“I’m not sure I’ve been to a care facility that manages all of the things you do here to the exacting standards you have. The staff, support staff, even the kitchen and the standards that are insisted on there, really are impressive. That’s why if you had a hundred more rooms tomorrow, they would be full. To everybody involved in this, I say congratulations, well done and keep doing it.”

Said Chairman of the Bon Secours Health System: “This is another really positive day in the evolution of Care Village, which we are proud to say is a standard bearer for the residential care sector. Its success over the years has been down to a combination of investment by Bon Secours and the incredible dedication and quality of care by staff, from our nursing team to an award-winning restaurant. It has made Care Village one of the most sought-after retirement facilities in the country.”

Said Hospital Manager/Director of Nursing at Care Village Nollaig Broe: “This is a great day for our new residents and also for our staff. They come here daily with one thing in mind; to live out the ethos of Bon Secours, which is to provide ‘good help to those in need’. At every turn they put the resident first and its evident in the happiness and comfort that our guests enjoy here every day.”

Said Bon Secours Health System Group CEO Bill Maher: “We’re extremely proud of what’s been achieved in Care Village over the years. Our continuous focus is on delivering the highest possible standards here and across all health system and it’s obvious, not least from our residents, that we achieve that. Our wider investment programme is about making sure the very best facilities infrastructure and services are in place and it’s fair to say with this significant extension, we’ve done that yet again.”