Cork is ‘wunderbar’ in Berlin

Cork tourism companies – including Pure Cork and the Celtic Cross Hotel in Rosscarbery – joined Tourism Ireland this week at the largest travel trade fair in the world, ITB in Berlin. Tourism Minister Brendan Griffin is lending his support to the 35 companies from Ireland who are exhibiting in the Main Hall and in the Youth and Adventure area, to grow Ireland’s share of the important German travel market. 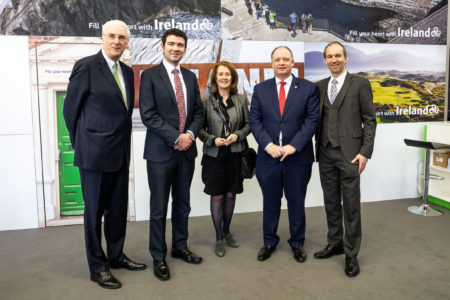 ITB is a key element of Tourism Ireland’s spring promotional programme in Germany, which is the third-largest source of visitors to the island of Ireland and one of the largest outbound travel markets in the world. 2018 was the eighth consecutive year of growth for Irish tourism from Germany, when we welcomed almost 818,000 German arrivals, delivering almost €500 million to the economy. The Fáilte Ireland commercial team is also attending ITB, supporting 10 Irish companies in the youth and adventure sector.

Germany is the third-largest source of visitors to the island of Ireland and one of the largest outbound travel markets in the world. 2018 was the eighth consecutive year of growth for Irish tourism from Germany, when we welcomed almost 818,000 German arrivals, delivering almost €500 million to the economy.

ITB (Internationale Tourismus-Börse) is the biggest travel promotion of the year, attracting over 160,000 visitors from 180 countries across the world. Of these, about 110,000 are trade visitors – including leading tour operators, travel agents, airlines, travel media and influencers – not just from Germany but from all over the world. The five-day event provides a valuable opportunity to network, negotiate and exchange vital contracts with the influential international tour operators and travel agents in attendance.

Speaking at ITB Berlin, Finola O’Mahony, Tourism Ireland’s Head of Europe, said: “The large representation of our tourism partners from Cork and Ireland at ITB this year is extremely welcome – and essential in the highly competitive global marketplace. Germans who are interested in taking a holiday which involves sightseeing and local culture remain our core audience; we are also targeting people who engage in outdoor activities while on holidays. ITB provides an excellent opportunity to spread the word about the many great things to see and do right around the island of Ireland.”

Tourism Ireland is rolling out an extensive programme of promotional activity again in 2019, to build on the success of recent years. Tourism Ireland’s new ‘Fill Your Heart with Ireland’ (in German, ‘Irland. Lässt dein Herz höher schlagen’) ad has been running on German TV during January and February, on a range of channels including ARD, ZDF, SAT.1, RTL, Super RTL, VOX and Disney – reaching more than 17 million viewers. A second TV campaign will run in the autumn. Tourism Ireland is also promoting the island of Ireland on social channels – with ads running on Instagram, YouTube and Facebook.

BUSINESS, ENTERTAINMENT, NEWS
Senator calls for Yoga to be taught in schools
Previous Post
Who is the best Hotel Employee in Cork?