Simon Coveney, TD, Tánaiste and Minister for Foreign Affairs & Trade in the presence Mayor of the County of Cork Councillor Patrick Gerard Murphy has today (April 5) marked the official opening of Tabor Group’s ‘Tabor Fellowship House’ at Spur Hill, Doughcloyne, Cork. This development was supported by The Department of Housing, Planning and Local Government through Rebuilding Ireland, Cork County Council and the HSE with funding of €4.8 million. 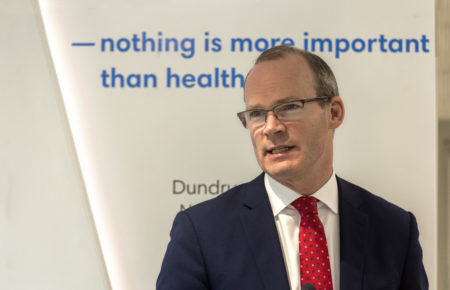 The development was built on the existing site of Tabor Fellowship House and will increase capacity from 10 residents to 22, completing a treatment programme. The facility will also include an additional 11 units of accommodation for people who have completed their primary addiction programme but require a step-down model of independent living while having access to ongoing support and care. This new project is addressing both the growing addiction issue in Ireland as well as the increasing homelessness issue. Tabor Fellowship House is one of the most modern facilities of its kind in the country.

Speaking at the opening Tánaiste Coveney said: “I am delighted to open the €4.8 million development of Tabor Fellowship House, which will see the service increase its capacity to provide both treatment and independent accommodation for over 30 people recovering from addiction.” 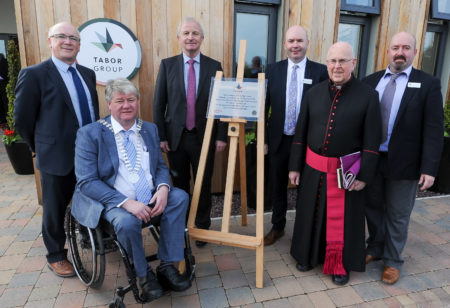 The Tánaiste paid tribute to Tabor Group; “Tabor Group have played an important role in the treatment and rehabilitation of people with addictions for the last thirty years.” He concluded by saying; “Today is another significant milestone in Tabor Group’s 30-year journey. This project will be a vital support for people addressing addiction problems in Cork and the wider community.”

Outlining the benefits of Tabor Fellowship House development, Denis Healy Chairman of Tabor Group said: “We have been delivering addiction services in Cork since 1989. Over that time, the number of people needing our services have increased significantly and the profile of client presenting for help has evolved. Tabor Fellowship House provides the necessary extended treatment for those struggling with addiction and who are working towards independent living”.

“The aim of the programme is to build on and consolidate the work of the recovery programme which has already begun in primary treatment. The programme emphasises personal responsibility, peer support, lifestyle changes to help continue a healthy journey of recovery” Denis Healy said.
“We have highly skilled staff working with over 300 clients and their families each year. This state-of-the-art facility will allow us to meet the growing needs of people suffering from addiction and sets the foundation for future similar projects. We are calling on our partners to support us in developing other similar facilities like this, here in Cork today” he continued.

He concluded by thanking the Department of Housing Planning and Local Government, Cork County Council and the HSE for their financial contribution. “Without their support this redevelopment would not have been possible.”

The Tánaiste was joined today by members of Tabor Group, Mayor of the County of Cork Cllr Patrick Gerard Murphy and Councillors of Cork County Council to mark the occasion. Speaking at opening Mayor Murphy praised Tabor Group for their work and commitment over the last 30-years, “Tabor Group is a much needed and to be celebrating 30-years in service is a testament to that” He went on to say, “Cork County Council was the Sanctioning Authority for this project and assisted in securing the €4.8 million grant funding through the Capital Assistance Scheme. Such a partnership approach to the construction of these new housing units with Tabor Group is part of a wider housing programme that is being delivered throughout the county.”

Mayor Murphy also acknowledged all those who helped make this facility a reality, in particular the approach taken in delivering this facility, “Cork County Council has had a long and rewarding working relationship with the not-for profit housing sector as a way of expanding its social stock and is delighted to see this project official opened today.”