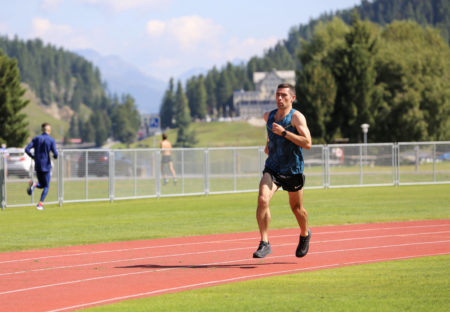 Currently undergoing three weeks of altitude training in St. Moritz, Switzerland, Cobh man Trevor Cummins is applying the final touches to his preparations ahead of his participation in the Berlin Marathon on Sunday, September 29th.

The strength and conditioning coach, who last year completed the Amsterdam Marathon and raised a total of €1,640 for the Mercy Cancer Appeal will once again raise funds for the cause which is very close to the hearts of Trevor and his family.

Trevor will be running the Berlin Marathon in memory of his father-in-law Phil Collins whose life was sadly cut short in 2018 at the age of 52, following a two-year battle with lymphatic cancer. During his battle with cancer, Phil was, on occasion, provided with urgent care in The Mercy University Hospital during his trips to Cork from London to visit his daughter Victoria who is Trevor’s wife and their young family. Victoria, who also worked at the Mercy Hospital within the Human Resources Department during Phil’s illness was so grateful for everything the nurses and doctors at the Mercy Hospital did for Phil.

Trevor wanted to support the Mercy Hospital to show his and his family’s gratitude for the amazing care they provided Phil with and decided to run the Amsterdam Marathon in 2018 in memory of Phil while raising funds for the Mercy Cancer Appeal. Trevor successfully completed the Amsterdam Marathon in a time of 2 hours 48minutes. Trevor hopes to better his time in the Berlin Marathon on September 29th and complete in under 2 hours and 40 minutes.

Commenting ahead of the Berlin Marathon, Trevor said, “This will be my fourth marathon to date and I’m delighted to be raising funds for the Mercy Cancer Appeal once again. When my father-in-law Phill was ill, we saw first hand the amazing work by the whole team at the Mercy Hospital and I’m delighted to be able to do whatever I can to give back. When Phil became unwell during his visits to Ireland, it was such a relief to know that the team at the Mercy were on hand to provide Phil with the care he needed. Being able to visit his family in Ireland was so important to Phil and we can’t thank the Mercy Hospital enough for their amazing care.”

To support Trevor’s efforts, please follow @TrainWithTrevor across all social media platforms with all donations being gratefully received at https://www.idonate.ie/fundraiser/11381097_trevor-s-berlin-marathon-fundraising-page.html

For more information on the Mercy Cancer Appeal, visit www.mercyfundraising.ie