A unique opportunity to WALK through the Jack Lynch Tunnel

The Jack Lynch Tunnel – Ireland’s first immersed tube tunnel – opened to traffic in 1999 and now carries approximately 68,000 vehicles per day. The construction of the tunnel transformed Cork City’s transport network and has since played a vital role in the development of the wider metropolitan Cork region.

Joe has been involved with the project through Mott MacDonald Ireland from planning to construction stage and he recounted the engineering techniques used to construct the tunnel between 1995 and 1999. This included building five individual concrete tunnel segments together with an open channel ‘Boat Unit’ each 122m in length at a dry casting basin in Mahon, before floating each segment across the River Lee and submerging them into a pre-dug trench on the riverbed. The segments were then joined underwater using complex marine operations to form the 610m long twin-bore tunnel which lies 20m under the River Lee today. 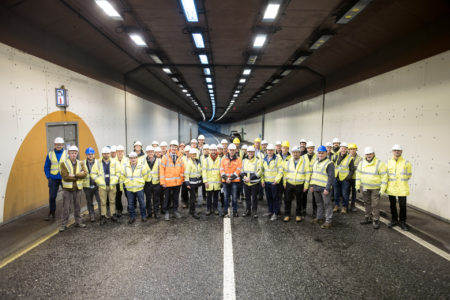 Marie Therese provided an overview of the current operation and maintenance of the Jack Lynch Tunnel which is managed by the Tunnel Operator Egis Road and Tunnel Operation (ERTO) Ireland. The maintenance and operation activities undertaken by ERTO, which amounts to an average of 6,500-7,500 manhours per annum, ensures that the tunnel systems are operating efficiently and effectively to the benefit and safety of road users.

Speaking at the event, Alan Costello, Chair of the Engineers Ireland (Cork Region) said, “It was a fantastic opportunity to visit the Jack Lynch Tunnel and get a closer look at the operation and maintenance activities undertaken during a live closure. Looking back at the construction of the tunnel which took place over 20 years ago reminds us of the engineering feat that was achieved when the scale and complexity of the project is considered. The Jack Lynch Tunnel continues to play a vital role in the city’s transport network today.”