Fehily Timoney & Co is a familiar name in Cork, even beyond Engineering circles. This is because its offices are in Core House, Poulduff Road, and are a familiar site on the busy road.

The firm is celebrating 30 years in business and has evolved from a structural engineering firm focusing on pharmaceutical and water services to become a globally-recognised civil and environmental engineering, scientific and planning consultancy which particular expertise in wind, roads and bridges.

Co-founder and MD, Eamon Timoney, says it’s been an incredible journey and he’d definitely do it all over again. He celebrated his 65th birthday in July and is finally starting to take more of a back seat in a business which now includes his daughter, Sinead, and an experienced, multi-skilled board.

“We’ve completed hundreds upon hundreds of projects over the past 30 years. The first win in any new sector will always stand out in my memory as being significant. In the early years, our focus was on Pharma Chem but that quickly changed and has continued to evolve over the years.

“It hasn’t always been a smooth journey. There have been bumps. The recession hit us hard. We had to let up to 100 people go and that really wasn’t easy. We’re a family-run, family focused firm and it really hurt to have to let go some very good people who were very much part of the FT family.”

Predicting trends and economic cycles isn’t as easy as it used to be, Eamon says. “We did see the last bang coming. But we were very big at the time. The Celtic Tiger years were good to us and for a while, we became far too over-reliant on the government sector.

“We learnt our lesson very quickly and since then, we’ve diversified, we’ve protected ourselves more from shocks and have learnt not to be over-reliant on any one sector. 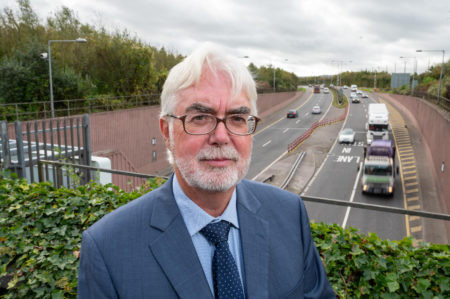 “When you’re very busy, as we were during the boom, you’re so involved in projects that there can be a tendency to let the skills development base slip. We diversified when things calmed down. We reinvented ourselves. That was the key to staying afloat.

“One thing I learnt over that time is to never lose sight of our objectives and that there was no point being a worrier. Thankfully, we regrouped and we looked at the bigger picture and we drove on again.”

Fehily Timoney has offices in Dublin, Cork and Carlow and has constantly moved with the times. They’ve been good at anticipating trends and are always on the look-out for graduates with new skills.

“We’re not your typical consulting engineering firm that specialises in structural and road works. Today, our team has expertise in waste management and community engagement, in wind farms and an in-house team that specialises in regulatory planning and waste, renewables and the infrastructure surrounding such works.

“It’s hard to predict where the industry is going in the future. But we see our focus being on corporate regeneration works and waste management, environmental and renewable projects.

“Energy management and urban regeneration are likely to be the next ‘big thing’ in an industry that is forever evolving. Lots of the major infrastructural works are complete in Ireland and we’re involved in some of the smaller schemes such as Dunkettle which are underway. Connecting Cork and Limerick will be the next big one on our radar.”

FT has Brexit proofed itself to an extent. But the uncertainty has impacted on capital projects. The firm has been involved in a huge number of projects across the UK – chief among these the second biggest wind farm in Scotland. A by-pass project, also in Scotland, is almost complete, as are a number of waste projects overseas.

“For the next five years, we will really focus on the Irish sector. We’re still doing some work in the Middle East. We’ve completed some major projects there over the past decade and it has been good to us.

“The biggest issue for us for the future will be resources. It’s very hard to get engineering and science resources – so many graduates left in 2008 and 2009 and didn’t come back. Lots of the Eastern Europeans have also gone home. We need more of an engineering and trades focus at second and third level if this is to be addressed and if firms such as ours are to survive and grow.”

And what advice would Eamon Timoney give himself if he had an opportunity to turn back time? “Don’t be over-reliant on one sector. Diversify and protect yourself against shocks. Develop your skills base and keep it developed. And thirdly, maybe set up a business after a recession rather than being at your peak when it hits,” he quipped.

Today, FT & Co is a very different company to what it was 30 years ago. It has future proofed. It now has approximately 70 members of staff, not just including engineers and scientists but also town planners, geotechnicians and technical support staff across offices in Cork, Dublin and Carlow.

FT continues to build and strengthen its planning and environmental services, engineering design and construction presence and deliver a huge variety of projects in Ireland, and internationally, in core competency areas of Planning, Waste Management, Environment and Energy, GIS and Data Management, Geotechnics and Civils Infrastructure. FT’s breath of experience and expertise enables it to deliver a broad range of services to both the private and public sector clients. And as the MD prepares to take more of a back seat, he looks forward to watching the next generation leave its mark, grow the company, prosper and grow.