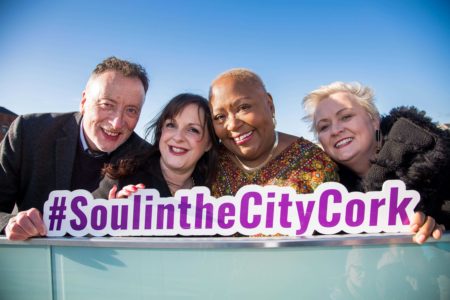 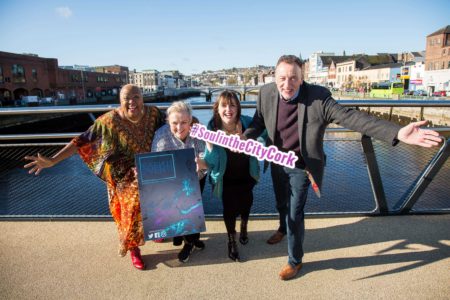 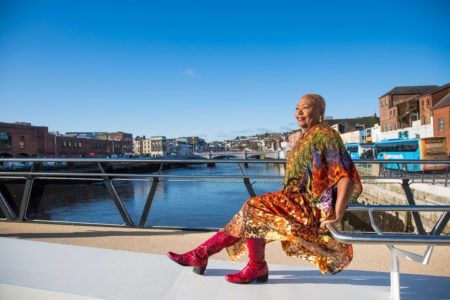 Karen Underwood, notorious soul singer will headline Soul in the City returning to Cork next June Bank Holiday Weekend for its fifth year under the new direction of Eventi Management, overseen by the discerning eyes of Sinéad Dunphy and Lawrence Owens.
Picture: Alison Miles / OSM PHOTO

December 2019 – Soul in the City returns to Cork next June Bank Holiday Weekend for its fifth year under the new direction of Eventi Management, overseen by the discerning eyes of Sinéad Dunphy and Lawrence Owens. This new management brings the Festival to the next level, augmenting its professional output while concurrently expanding the whole Festival across the City. With new sponsors and partners already secured, 2020’s Soul in the City is set to sizzle – and right in time for Christmas as tickets are already on sale for their headline concert direct from their website.

Bringing over twenty years of experience in the arts, Eventi Management is set to have Soul in the City Festival reach new heights with several plans already in place to expand the Festival across the city, and an excitingly amplified programme of events. With vast experience in event management and successful festival execution and acclaim, Eventi Management’s expertise will ensure that this year’s Soul in the City Festival will be enhanced, guaranteed to entertain, enthral and excite the people of Cork and further afield.

Soul in the City was conceived in 2015 by Noreen Gannon of Gallagher’s Gastropub and Karen Underwood, notorious soul singer, and has gone from strength to strength in the years since then. This festival is yet another event which is an important contributing factor to Cork’s growing economy and reputation as a great destination for music, food and all things cultural. The only festival of its kind in Ireland, Soul in the City presents a diverse and dynamic programme, catering for a wide range of tastes and ages. Over the June Bank Holiday Weekend, Soul in the City will bring a taste of the American South to the heart of Cork, with the Victorian Quarter remaining as the central hub for the Festival weekend. This year’s Festival sees Cork’s own soul diva Karen Underwood headline Blue-Eyed Soul at the Everyman Theatre, right at the heart of the Victorian Quarter for the headline Concert of the weekend. While across the city, Triskel Christchurch hosts the Opening Concert, a first for the Festival with local beguiling chanteuse Laoise Leahy, and band with some exciting guests. While the focus on soul food and African American culture as a whole will take centre stage of the Festival’s main programme of events all encased with a second-to-none music trail across the city along with an educational music strand and platforming resource for new musicians – just some of the many innovations that Eventi Management is bringing to the table.

On announcing Eventi’s management of the Festival from 2020, Managing Director, Sinéad Dunphy said “We’re thrilled here at Eventi to work on Soul in the City, having all been fans of the Festival since its inception. Having won the tender for the Festival management, we’re excited to work with Noreen and Karen and ensure their ‘Festival baby’ is future-proofed, sustained and grown to be a big contender on the Irish Festival scene. The opportunities are enormous, and with several new partners already secured and working with previous partners of the Festival at more augmented levels, this Festival is set on a trajectory of success. Our ambitions are huge, and our commitment to the Festival is even larger.”

Established in June 2019, Eventi Management is a Cork-based company providing services including event management, PR and marketing and more. With in-depth knowledge of the arts industry and an unparalleled commitment to every project undertaken, Eventi Management’s dedication to the arts is matched only by their sector knowledge and awareness. At the helm of this business is Managing Director Sinéad Dunphy, former Festival Director of the Guinness Cork Jazz Festival and Cork International Choral Festival and Lawrence Owens, CEO of the Cork Business Association. With the overt success of both directors in their own fields, this Festival is sure to be brought to new heights while keeping the heart and soul of the Festival at the core of its endeavours. Driven by a desire to bring their best to each individual project or client, Soul in the City is just one of many ventures that Eventi is set to undertake and take to the next level this coming year.

For tickets and more information on Soul in the City 2020, visit www.soulinthecitycork.ie