The first new distillery in Cork city in almost 50-years, has launched its first release, Maharani Gin. Founded by Robert Barrett in 2020, Rebel City Distillery is situated in the heart of Cork’s historic Docklands, and will produce a range of premium spirits which draw inspiration from around the world. Maharani Gin celebrates a fusion of Cork and Keralan cultures. Robert being from Cork, and his wife Bhagya being from the state of Kerala, India. Maharani Gin is “an homage to Keralan women who are known for their strength and importance in society”.

For its premises Rebel City Distillery has chosen part of the Former Ford Factory on the Marina. Now known by the more practical name of Unit P6, “Marina Commercial Park” the location draws “on the innovations of the past to inspire the creations of the future”. From 1917 to 1987, the factory of Henry Ford & Sons was the industrial hub of Cork City, manufacturing motor vehicles on the banks of the River Lee as one of Cork’s largest employers. 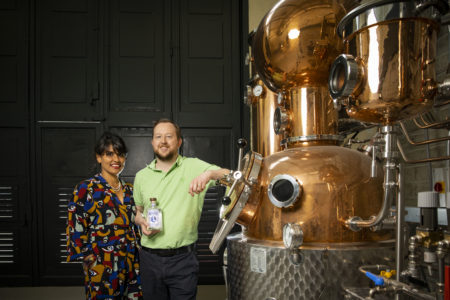 Keralan culture is traditionally matriarchal, and the word ‘Maharani’, meaning Queen, is a tribute to revolutionary women everywhere. The premium gin is zested with pomelo fruit, and uniquely spiced with cassia and nutmeg-mace, all sourced from a women’s organic farming co-operative in Bhagya’s home state of Kerala, India. This heady combination results in a gin of truly transcendental taste, a liberation of spirit and spice.

Rebel City Distillery crafts, distils and bottles a unique range of spirits on-site. The distillery will produce premium spirits, which draw inspiration from around the world. The company is also planning to open a visitor centre later in 2020 offering tours, tastings and a gin school experience.

Robert Barrett is a biochemist turned fine spirits expert who, following a number of years researching cancer cell migration, spent more than a decade learning the art of crafting and distilling premium spirits around the world. Robert completed an MSc in Brewing & Distilling at the Heriot-Watt University in Edinburgh, which counts many stalwarts of the craft drinks industry among its alumni.

Robert then spent several years honing his expertise in Ireland and Canada with a number of renowned distilleries and drinks businesses. In Ireland this included Kilbeggan (now Beam); The Shed Distillery and FDT Consulting Engineers and Project Managers. In Canada Robert worked with Vancouver-based Central City Brewers and Distillers where he set up and established their distillery focusing on whiskey, gin and vodka.

Robert combined this wealth of industry experience to set-up his own boutique distillery alongside his wife, Bhaghya and father, Brendan, and so Rebel City Distillery was founded in 2020.

Robert’s wife Bhagya hails from Kollam in Kerala, India. A software engineer by trade, Bhagya’s expansive career has seen her work in large cities Chennai, India and Madrid, Spain before moving westwards to Ireland, where she completed an MBA at Dublin Business School. Currently, as a Senior Program Manager at Dell, Bhagya manages project teams spanning the USA, Ireland, Malaysia India, Brazil and China. Bhagya is multilingual, speaking Tamil, Hindi, English and Spanish along with her native language, Malayalam.

This experience of different languages and cultures has provided Bhagya with a worldly perspective, and her own cultural identity inspired Maharani Gin. Bhagya identified the organic women’s farming co-operative in Wayanad, which is her favourite part of Kerala, as the perfect location to source Rebel City Distillery’s fine botanical selection.

Robert’s father Brendan Barrett mentored Robert in developing the business and was actively involved in the refurbishment and redevelopment of the distillery building in Cork city. Previously the Managing Director of Bam contractors for 25 years, where he managed a staff of 2,000, Brendan has had an extensive career in the fields of engineering and construction. He is currently a director of Peamount Healthcare. 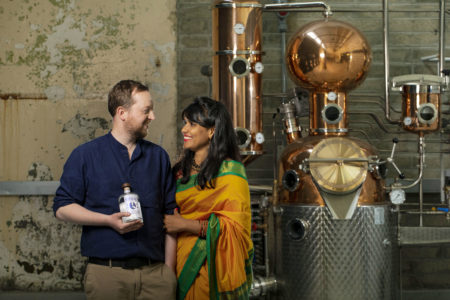