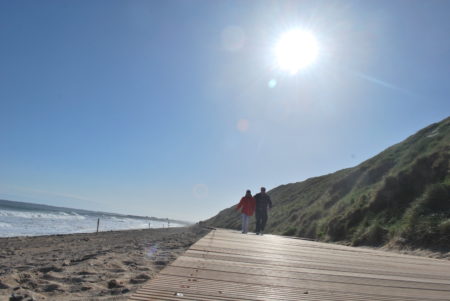 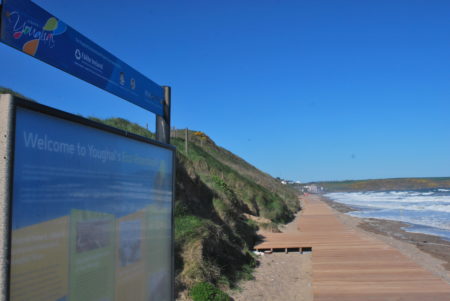 Youghal is set for another boost to its tourism offering as works get underway on the extension of the current 400-metre boardwalk at Claycastle beach onto Redbarn. The contract for the works, with a total value of €1.7 million, was the first undertaking of newly elected Mayor of the County of Cork Cllr Mary Linehan Foley, a native of Youghal, Cork with County Council’s Divisional Manager South, Valerie O’Sullivan and Director of Sorenson Civil Engineering Ltd., John Wallace.

Once complete the route will form part of the National Coastal Walking Route and will span 1.9 metres. The Cork County Council project will significantly enhance the ‘beach experience’ for users, providing a formal pedestrian walkway from Redbarn beach into Youghal Town Centre, and is expected to be completed by October 2020.

This announcement comes following Cork County Council’s allocation of €500,000 for the extension under the Outdoor Recreation Infrastructure Scheme which is operated by the Department of Rural and Community Development. Phase 1 of the project has already been successfully delivered by Cork County Council in partnership with Fáilte Ireland. The current set of works will see the walkway run from Claycastle to Red Barn, adjacent to the dunes and reed beds of Ballyvergan Marsh. Completion of the route will improve access, enhancing the natural heritage experience of walkers, providing a permanent hard walking surface of a two-metre wide boardwalk which successfully facilitates easy access for wheelchair users and pushchairs.

“I am especially proud to sign this contact as County Mayor for what is a fantastic amenity in Youghal. The extension will see the original 400 metre boardwalk at Claycastle beach, which was completed in 2012 extended by 1.5km as far as Redbarn beach. The boardwalk is hugely popular and this further development is great news for Youghal and the community. It also offers an opportunity to raise awareness of the ecological significance of Ballyvergan Marsh and coastal zone, providing low impact on the environment, restricting erosion, and provision of an awareness platform of the area’s value to both locals and visitors alike.”

“This walkway will drive development of the area as a ‘destination’, complementing Cork County Council’s recent investments and developments in the town, including the upcoming Midleton to Youghal Greenway. It will ultimately drive footfall to Youghal town and surrounding area and become a driver for economic regeneration.” 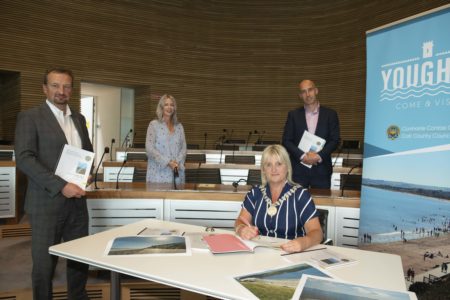 EAST CORK: Cllr Mary Linehan Foley from Youghal elected as ‘Mayor of the County of Cork’ for 2020-2021
Previous Post
How To Get Relevant, Quality Traffic To Your Website
Next Post
Tweets by @TheCork_ie