The Renault Kangoos, Nissan Leafs, and Hyundai Konas will be driven by the Council’s Operations staff who deliver road maintenance, housing maintenance, parks management and waste management services, meanwhile two of the cars will be used as ‘pooled vehicles’ for use by all City Hall-based officials who need to use a car during the working day.

Cork City Council is taking the lead nationally by putting up to 76 electric vehicles (EVs) on the road and thereby creating the biggest local authority EV fleet in the country.

Cork City Council will see substantial savings of up to €700,000 over five years following the rollout of the electric fleet which is replacing diesel vehicles. Electric vehicles help improve air quality, produce less than half the carbon emissions of petrol cars and will make the city’s communities healthier and better places to live in. 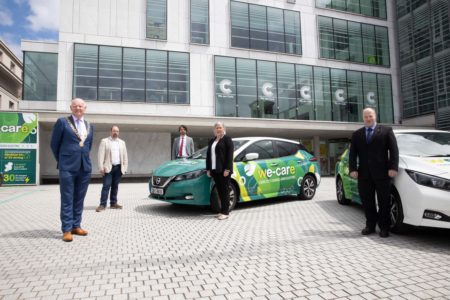 New fast-charging points have been installed at City Hall and at Cork City Council depots for the electric fleet, with the support of Bord Gais Energy. Another 30 plus charging points are available to the public around the city through various providers.

Lord Mayor of Cork, Cllr John Sheehan said: “Cork City is projected to double in size over the next 20 years becoming the fastest growing city in the country. Cork will only be able to absorb this population increase yet retain our quality of life if more of us move over to sustainable modes of transport such as walking and cycling, opt for public transport or if we can, consider electric vehicle options if we are changing our car”. 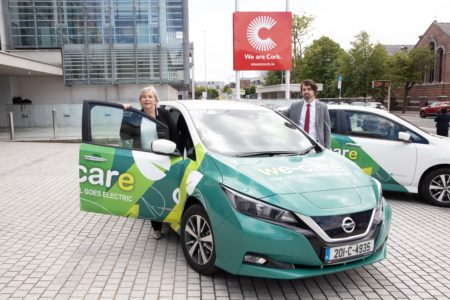 “An overarching goal of our new corporate plan for 2020-2025 is to drive Cork’s future growth sustainably by leading on climate action. Road transport is a major cause of air pollution and climate change and yet nearly three quarters of Cork people commute using cars. As part of the €3.5 billion Cork Metropolitan Area Transport Strategy (CMATS), we want to work with our partners to support a modal shift to more sustainable means of transport and to help people think of alternatives before they automatically reach for the car keys when going to work, taking children to school, popping out to the shop or socialising by day or night”.

“This is Cork City Council leading the charge for other local, private and public-sector organisations to follow, by giving its own employees the opportunity to drive electric vehicles and by demonstrating the benefits of electric cars and particularly the cost efficiencies which really are substantial for the local authority sector. We have done this because it is the most cost effective solution for our fleet, is technically viable, supports national policy and in a city impacted by climate change is the right and proper thing to do”.