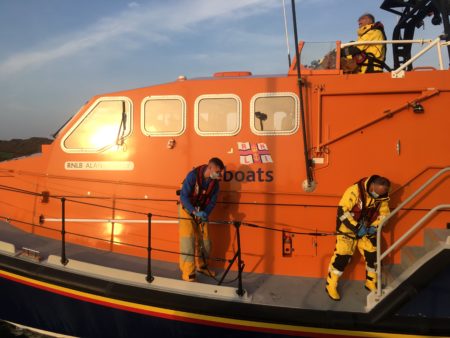 Baltimore RNLI were called out to provide a medical evacuation earlier this afternoon (Monday 21 September) from Sherkin Island off the coast of Baltimore, West Cork.

The volunteer lifeboat crew launched their all-weather lifeboat at 2.07pm, following a request from the Irish Coast Guard to provide a medical evacuation (Medivac) to an injured female.

Conditions within the harbour at the time were calm with a westerly force 4 wind and no sea swell.

Speaking following the call out, Kate Callanan, Baltimore RNLI Volunteer Lifeboat Press Officer said: ‘This is the third Medivac for Baltimore within a 48 hour period. Previously there were two Medivacs to Cape Clear Island, the first on Saturday evening and the second on Sunday morning. If you find yourself in need of medical assistance whilst on an island, call 999 or 112.’