Title: The Free Range Detective Agency: The Baboon with the Golden Bum
Author: Cork based Jed Lynch (it’s not clear is this is a real person, or a pen name?)
Intended readership: Children aged 8+
ISBN: 9781912417476#
Official Release date: 08/10/2020
Publisher: Little Island (Despite their name ‘Little Island’ are not based in Cork, instead they are in Dublin and are an Independent children’s press “publishing good books for young minds”.) 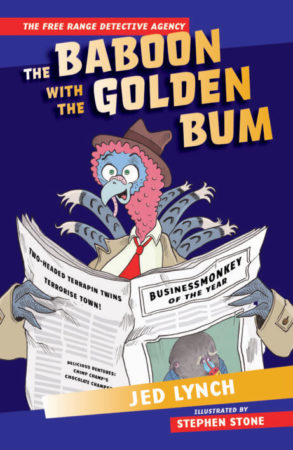 ‘Jed and Stephen have done it again, with another crazy, slightly anarchic, extremely Irish turkey detective … Funny, clever, and just weird enough for kids to really enjoy … A fantastic read. I hope this series runs and runs.’ – Read and Reviewed

‘The Baboon with the Golden Bum has all the ingredients of a great detective story in which everyone is trying to outwit everyone else.’ – Scope for Imagination

Children like Animals, and in particular they like Turkey’s as can be seen from the previous popularity of Dustin the Turkey. Indeed Dustin is quoted as saying that this series is “So funny I laid an egg. Genius”.

In this Children’s book (ages 8+) the protagonist is ‘Seamus the private detective’. We follow this Turkey as he performs his investigations. All of the characters encountered are animals.

This is the second book in the series. The first was called Murder Most Fowl., but don’t worry if you haven’t read that because the series can be read in any order.

Seamus the turkey detective is once again desperate for a new case. When security breaches threaten two-time Business Monkey of the Year, baboon Frank Bloombum’s top-secret money-making facilities, the Free Range Detective Agency is called to the rescue. Who might be responsible? The baboon, the jackal, the newt, the toad? And what about that other toad Frank accidentally flushed down the toilet all those years ago? It’s a hard case, but, Seamus can count on his friends, a meerkat and a mole, to help him crack it.

In our view, Cork Author Jed Lynch has crafted another hilarious, and yet serious investigation led by ‘Seamus the private detective’. The book is playful throughout with illustrations by Stephen Stone, which reminds us of Quentin Blakes ilustration of Roald Dahl classics. This is no surprise as Stephen Stone has created artwork for more than 35 books for publishers including Oxford University Press, Harper Collins, and Pearson.

An admirable gimmick within the book is the inclusion of a postcard pre-addressed to ‘Seamus the private detective’ c/o the Dublin postal address of the Publisher. It’s great to see this old world mode of communication being used, as it will encourage children to practice their handwriting, having already practised their reading.

For the price this book is certainly worth purchasing, plus you will be supporting an Irish publishing business, and author.

The RRP is 6.99 GBP which has been translated as 9.00 EUR by publisher Little Island.