“My covid story starts in late March. I started to experience a loss of sense of smell and taste with no other symptoms. I did not qualify for a test at the time, as my symptoms were not in the case definition. I recovered my sense of taste and smell a week later.

About a month later, on the 26th of April, I started to feel unwell after a day working in Covid ICU. I was tested in the community and the swab was negative. My symptoms at that time were stomach pain, temperature spikes, profuse sweating, constant vomiting and diarrhoea as well as a rash on various parts of my body- particularly my hands and my feet.

This got to a point where I needed hospital admission for what I thought was a severe gastroenteritis. I was admitted on the covid pathway in CUH and got another swab which was again negative as I wasn’t actively shedding virus at that time.

My heart tracing was showing signs of damage as were my heart enzymes. Two days later my oxygen levels dropped and a chest x-ray revealed a new lesion. I was informed of a new post covid syndrome starting to be reported in Italy – typically seen in children. So, I was re-swabbed, the results of which showed I had had a COVID-19 infection around 4-6 weeks prior.

Later that evening I rapidly deteriorated.

My oxygen levels reduced and in the space of a minute I was unable to finish a sentence. On the basis of how quickly I was deteriorating I was admitted to ICU.

After analysis of my scans the decision was made to lie me on my front, we occasionally do this for COVID-19 patients who are intubated in ICU to improve lung function. If I didn’t improve I would be put into a coma and intubated.

Thankfully that process helped me stabilise for a number of days.

However, my heart function started to drop to a third of what it should be. So, at that point I had two major system failures as part of the post covid syndrome, both an acute respiratory failure and an acute heart failure.

At that point I started to wonder would I ever get out of ICU, would I die in there?

I came to accept that if I did, everything would have been done to prevent that from happening.

The ICU doctors were supporting my heart through medication to ensure my blood pressure was maintained.

Those two or three days were probably my lowest point. I was in constant contact with my girlfriend and my family but I was also receiving a lot of emotional support from the staff and from my friends.

Thankfully everything slowly started to resolve.

I was by no means fixed when I went home. I was breathless walking around the house and was in constant contact with the physios in CUH to monitor how I was getting on.

It took 6 weeks from discharge to regain a sense of normality. Again, the entire time I was terrified because I was in the realm of the unknown. I didn’t know how much function I would regain and to this day I still have reduced levels of fitness.

As to why I’m sharing my story, while the elderly are most at risk from COVID-19, this virus can still have devastating effects on people of any age and there is no real way to tell who will deteriorate and who will get through it without severe symptoms. I am a 23 year old, who maintained a high level of fitness and I ended up in ICU due to COVID-19.

I would urge anyone thinking that they are immune to the more severe effects of this disease to think twice and to follow the public health advice.” 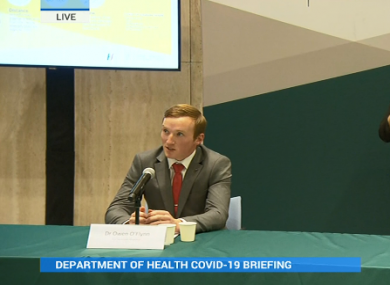