The parents of a Crosshaven RNLI crew member is asking Cork people to support the charity’s annual Christmas appeal after volunteers faced an unprecedented year due to the Covid-19 pandemic. 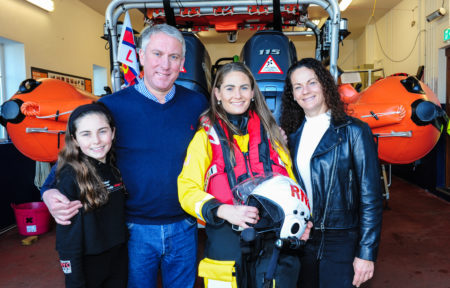 The RNLI has seen a drop in income in 2020 as traditional fundraising activities had to be cancelled. This was despite the lifesaving charity having to spend extra funds to ensure its volunteer lifeboat crews including those at Crosshaven RNLI, had the vital PPE, such as face masks and gloves to keep their lifesavers safe.

Yet, during an extraordinary year and while facing new challenges in saving lives at sea, lifeboat crews wearing additional PPE and adapting to restrictions, continued to respond to the pager and work tirelessly throughout the pandemic to keep people safe.

As lockdown restrictions eased and between the months of July to October, lifeboats at Ireland’s 46 stations, launched 512 times with their crews bringing 793 people to safety. The statistics reflect an increase of 33 more launches and 164 more people aided, on the same four-month period last year.

Robert and Colette Foster whose daughter Caoimhe, 20, is a volunteer crew member on Crosshaven RNLI’s inshore lifeboat, know all too well how important it is for crews to have the right lifesaving kit and PPE.

‘We are very proud that Caoimhe has been a volunteer lifeboat crew member in Crosshaven for three years now,’ her father Robert said. ‘Our son Cillian, 17, is also joining the crew but due to Covid-19, won’t be starting his training until next year. Our youngest Clodagh is 12 and having watched Caoimhe’s involvement in the last few years, she is already aspiring to be part of the future crew.

‘As parents, we are very proud, but we also worry when the pager beeps and Caoimhe is called out to save others who are in trouble. There is always such a sense of relief when she helps to bring those in difficulty back to safety but also when she returns home safely herself.’

Caoimhe was always destined to join the lifesaving crew at Cosshaven RNLI having sailed since the age of eight. Watching the lifeboat respond to call outs when she was on the water herself and knowing as a sailor, the importance of the work the crew do, she was inspired to join. As soon as she reached the age of 17 and was eligible to become a crew member, she did so with her friend Molly Murphy on the same day.

While Caoimhe was the first family member to get involved, Robert and Colette are now well used to family events being interrupted by the pager.

‘Caoimhe by her very nature is a very giving person, very caring, and loves to give back to the community in any way she can,’ Robert said. ‘We live about a mile from the station and I remember before she was driving, if the pager went off in the middle of the night, rather than waken us up to leave her down, she would hop on her bike and cycle to the station herself and we wouldn’t even know she had gone – that is the kind of person she is.’

And this Christmas will be no different for the Foster family. Robert and Colette will be prepared for Caoimhe, to rush out the door at the sound of her pager, even during their Christmas dinner.

‘It can be difficult seeing her leave when the pager goes. We worry about what she might go through when she is out on a shout. Even at Christmas, we know that she might have to drop everything like the other volunteers in Crosshaven and run out the door to go and save someone’s life. However, we also know how important the crew member’s role is and how rewarding it is for Caoimhe to make her contribution. The RNLI depends on the goodwill of others to support the work our volunteer crews do and that is why as a family, we would urge people if they can, to give to the Christmas Appeal.’

Caoimhe added to her father’s plea and said a donation to the charity would make a great difference: ‘RNLI volunteers have had a challenging year but thankfully, with many additional safety measures and procedures in place to ensure our safety, we have remained on call 24/7 throughout the pandemic. We have our standard PPE but now also wear masks and gloves and take extra precautions at sea. We know the extra PPE comes at a financial cost to the charity and during a time when fundraising activity has had to be halted.

‘The best Christmas gift RNLI volunteers like me can wish for, is a kind donation to our Christmas appeal. Funds raised will provide the lifesaving kit we need when we are at sea and helping to bring someone to safety.’

As a charity, the RNLI relies on the support of the public to continue saving lives – and that support is needed now more than ever. To support, visit: RNLI.org/Xmas