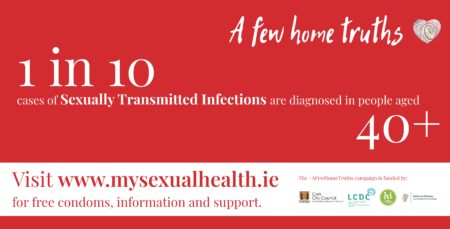 Just before the festive season, Cork’s Sexual Health Network launched the ‘#AFewHomeTruths’ campaign on billboards around Cork city and on MySexualHealth.ie. The campaign seeks to raise awareness about various sexual health issues that affect people in Cork, and to signpost to the relevant support services.

The campaign’s distinctive red billboards can be spotted around Cork city until mid-January. To create the campaign, statistics were collected from each member organisation of the Sexual Health Network, including The Sexual Health Centre, the GUM Clinic at the South Infirmary Victoria University Hospital, Youth Health Service, Gay Project, Linc, Sexual Violence Centre, Sexual Assault Treatment Unit, the HIV Clinic at Cork University Hospital, Health Promotion & Improvement (HSE South), and the Public Health Department (HSE South) as well as published government surveys such as the My World Survey 2 (2019).

As the Sexual Health Network represents a diverse group of organisations, the campaign covers an array of topics; from Sexually Transmitted Infections and HIV, to sexual assault, consent, cervical screening and LGBTI+ issues. Statistics such as ‘1 in 3 cases of HIV are a result of heterosexual transmission’ aim to raise awareness about stigmatised sexual health issues. Other information such as ‘Over 40,000 people in Cork and Kerry identify as LGBTI+’ and ‘12 years old is the most common age for us to discover our LGBTI+ identity’ aim to encourage positive conversations about sexuality.

“As the majority of the statistics shared in this campaign are taken from Cork-based sources, the Sexual Health Network hopes that the information will hit closer to home for people in Cork.”

“January is often a very busy month for people availing of sexual health services such as STI screening. In launching the campaign in December, the Sexual Health Network hopes that the people of Cork will be encouraged to make healthy choices over the Christmas period. Anyone that needs support will be able to check which services are available to them at mysexualhealth.ie.”

The campaign encourages people to visit MySexualHealth.ie, where they can order free condoms from the Sexual Health Centre and find information about the various support services available to them in Cork.

The #AFewHomeTruths’ campaign is delivered by local outdoor advertising company ‘Notes to Cork’ and is funded by Cork City Council, Healthy Ireland, the Government of Ireland, and Cork City Local Community Development Committee.

To find out more about the ‘#AFewHomeTruths’ campaign, visit www.mysexualhealth.ie