WORLD’s OLDEST YACHT CLUB: Admiral of @RoyalCork in Crosshaven named as Person of the Month

Colin R. Morehead, Admiral of the Royal Cork Yacht Club, which celebrated its 300th birthday last year, has been named as Cork Person of the Month for January 2021.

At the club’s 300th AGM, Colin Morehead was elected the 42nd Admiral of the Royal Cork Yacht Club. Unfortunately, due to COVID-19, many of the Club’s planned 300 birthday celebrations had to be cancelled last year. Morehead has been part of the Royal Cork all of his life, following in the footsteps of generations of his family before him. Upon receiving the title of Admiral, Colin outlined his wish to develop a five-year plan for the club, along with the development of a new sustainability plan for the club which underpins all of the club’s activities. As Admiral, Colin’s passion and dedication to the club has become ever more prominent, as he has worked to successfully maintain and grow the institution that is the Royal Cork Yacht Club.

Additionally, Morehead has ambitions to secure an additional European or World Championship event to be run at the club by 2023.

The Royal Cork Yacht Club (RCYC) is based in Crosshaven, Cork, and is the world’s oldest yacht club, founded in 1720. The Royal Cork Yacht Club is one of the World’s leading Yacht Clubs, and is in the forefront of all branches of sailing activity. The members of the RCYC are the organisers of the biennial Cork Week, widely regarded as Europe’s premier sailing event. The club has hosted many National, European & World Championships, putting Cork on the map for its sailing prowess. Its members compete at the highest level in all branches of sailing, and the club has a number of World, Olympic, Continental and national sailors among its membership.

Speaking on his success Admiral Colin Morehead said, “To be named as Cork Person of the Month is an honour. Having been involved with the Royal Cork Yacht Club all my life it is truly rewarding to receive this accolade. But nothing that I have done at the club could have been achieved without the support and dedication of the staff and the clubs incredible committee’s and volunteers. Volunteers give of their time and services freely and they are held with the utmost regard at all times by all club members.”

Awards organiser Manus O’Callaghan said, “The Royal Cork Yacht Club has always been a place of enormous importance for Cork sailing enthusiasts. With the committed and passionate Colin Morehead as Admiral the club will no doubt go from strength to strength, over the next 300 years. RCYC, as the oldest yacht club in the world in one of the great harbours of the world, is something all Cork can be proud of. ” 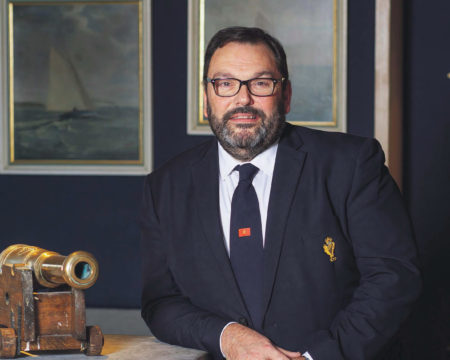 Colin Morehead will now go forward for possible selection as Cork Person of the Year, with the other Persons of the Month chosen in 2021.