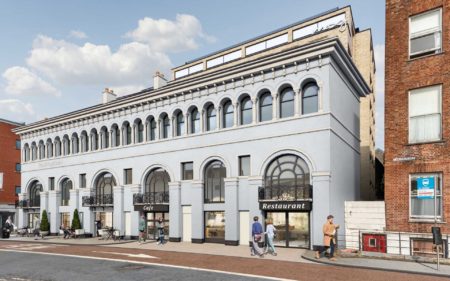 The disctinctive building (the front of which remains) dates from 1885 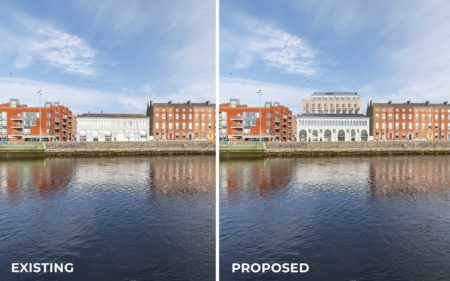 Planning permission is being sought for the construction of a 194-bedroom hotel located at Camden Quay, Cork.

The hotel will be located at the former McKenzies building – which was later used as a temporary Circuit Courthouse – site on the bank of the River Lee. The site was bought for €3.5m in late 2020 by Irish & UK developers, JMK Group.

Situated on the bank of the River Lee, a 194- bedroom property is set to be occupied by Moxy Hotels.

The plans outline the retention for development, conservation, refurbishment and change of use of the existing courthouse building which is a protected structure.

The proposed hotel comprises 194-bedrooms which will feature 153 hotel rooms and 41 long stay suites. A 2- to 6-storey annex will be constructed to the rear of the protected structure.

A rooftop restaurant, gym and ground floor restaurant/café are also included in the plans.

If approved, the scheme is set to be occupied by Moxy Hotels who fall under the global hotelier group, Marriott Group.

The proposed hotel will be located directly opposite the Cork Opera House on the bank of the River Lee.

Permission and retention permission for the development , conservation, refurbishment and change of use of the Former McKenzies/Circuit Courthouse, Camden Quay, Camden Place and Pine Street, Cork. The proposed development consists of the construction of a 194-no. bedroom hotel consisting of 153 no. hotel rooms and 41 no. long stay suites and all ancillary site development works. The proposed development consists of or comprises the carrying out of works to a Protected Structure. Permission is being sought for internal and external modifications, the refurbishment and change of use of the existing building and the construction of a 2-6 storey over ground floor annex to the rear of the Protected Structure. At ground floor level the proposed development contains a café with mezzanine level, hotel and long stay suites reception areas, gym, meeting rooms, kitchens, storage, staff welfare, servicing and plant areas with hotel accommodation at upper floors. The proposed development includes a covered ground floor service area to the north complete with refuse store, bicycle store, switchroom and standby generator areas. The proposal includes a rooftop restaurant with outdoor terrace, to be accessed via a dedicated entrance from Camdem Place. permission is also sought for all associated site works, including water/wastewater services, landscaping and ancillary signage. The proposed development includes customer entrances from Camden Place and Pine Street, with a service entrance to the north from Pine Street. Retention permission is also sought for the demolition of the buildings to the rear of the Protected Structure.