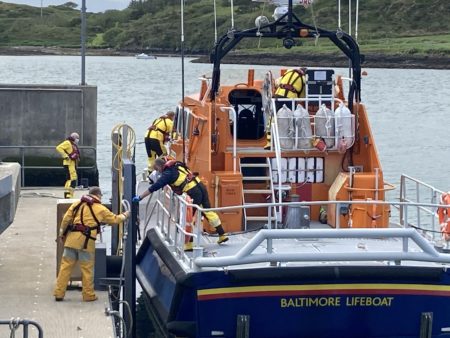 Baltimore RNLI were called out to provide a medical evacuation this afternoon (Thursday 3 June) from Sherkin Island off the coast of Baltimore, West Cork.

The volunteer lifeboat crew, under Coxswain Aidan Bushe, launched their all-weather lifeboat at 4.46pm, following a request from the Irish Coast Guard to provide a medical evacuation for a woman who was visiting the island.

There were seven volunteer crew onboard the lifeboat, Coxswain Aidan Bushe, Mechanic Sean McCarthy and crew members Jerry Smith, David Ryan, Simon Duggan, Jim Baker and Colin Whooley. Conditions at sea during the call out were calm with a south westerly force 4-5 wind and no sea swell.

Speaking following the call out, Kate Callanan, Baltimore RNLI Volunteer Lifeboat Press Officer said: ‘If you find yourself in a medical emergency whilst on an island call 999 or 112.’