Irish Players To Watch In The MLS

Which Irish players have blossomed in the MLS? Read on to find out

The Best Irish Players in the MLS

When you think of the MLS you don’t necessarily associate the league with Irish players. However, there are a few of them who made the long journey across the pond and have established themselves as must-have players.

Whether you support a certain Irish player or back your players team, these are the best Irish players currently playing their trade in the States.

Someone who has had experience across the globe in a few ways, Jon Gallagher was born in Dundalk and plays as a forward, right-back or midfielder for the Texan outfit Austin FC. The 25-year-old has also played in Connecticut, England and Singapore.

The 25 year old also had the opportunity to have trials at footballing giants like Juventus, Marseille, Newcastle United and Blackburn Rovers. However, he ended up playing four years off college football for the Notre Dame Fighting Irish. He won a number of awards while at Notre Dame, including USC Second Team All-American and USC First Team All-South Region.

A player who has spent time in Greece, England, the Netherlands and now the US, 27-year-old Shane O’Neill joined the Colorado Rapids Youth System back in 2009, before stepping up to the first team in 2012.

His loan spells across Europe helped him develop his skills and first-team acumen, and while he is eligible to play for both the United States and Ireland, he opted to play for the United States U20 and U23 teams between 2012 and 2016. Plus, during his high school in Colorado, he was named Colorado’s Player of the Year.

The centre-back was named player of the season in his first year with Blackburn Rovers. Unusually he is eligible to play for Germany because he was born in Hamburg, the United States through his father and Ireland through his mother, he has chosen to represent the Republic of Ireland, and has made 3 appearances and scored one goal for the senior team.

He most definitely found his feet while playing for Inverness, and has subsequently enjoyed a fairly regular role in first teams. He has played for Ireland at U17, U19 and U21 levels and is enjoying regular football for Atlanta United. 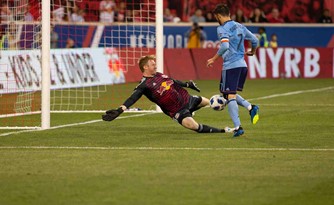 A player that wasn’t born in Ireland but did qualify to play for them is Ryan Meara. The 30-year-old goalkeeper was born in Chestwood New York, and has played for the Long Island Rough Riders, Jersey Express, the New York Redbulls and New York City FC.

Meara is currently still part of the New York Red Bulls setup, plying his trade in the New York Redbulls II team. While he has had a quiet career, he has been solid between the posts and a player you can rely on.

Another player who was not born in Ireland but qualified to play for them is Tommy McNamara. The 30-year-old midfielder currently plays for the New England Revolution. He has had successful spells at the Houston Dynamo and New York City FC.

His most successful tenure to date would be the 3 seasons he spent at New York City FC, where he made 86 appearances and scored 13 goals. While he qualifies for both the United States and Ireland at an international level, he is hoping to get called up for either.

The youngster on this list, Pearse O’Brien is 16 years old and was born in West Hartford, Connecticut. Another player who is eligible to play for Ireland through his parents, O’Brien spent his youth career at Oakwood SC, before spending a year at Real Salt Lake.

Currently, he is signed to Real Monarchs, the second team for Real Salt Lake. he made his debut for the side in May of this year, coming on as a substitute during a defeat against LA Galaxy II.

As mentioned already, there are very few Irish players who have made the journey to the United States and were able to make a name for themselves in the world of football, many only know of Robbie Keane when he was at LA Galaxy.

However, there are a number of players, young and old, who are doing Ireland proud and putting in solid, high-level performances for their club. Even though they left their birth country to pursue their career elsewhere, every Irish football supporter should be very proud of what these players have done in a foreign land, and how their java paved the way for other youngsters to blossom in the US.