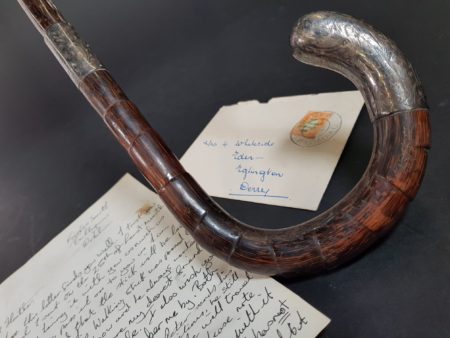 A walking stick belonging to Michael Collins and documents linked to the political leader must be acquired by the State given their historical significance, a Fine Gael Senator has said.

Cork South West Senator Tim Lombard has written to Minister for Tourism, Culture, Arts, Gaeltacht, Sport and Media, Catherine Martin, TD, requesting the State purchase artefacts linked to Michael Collins that are set to be auctioned in Belfast next week.

Senator Lombard said, “Items related to General Michael Collins, namely a walking stick owned by him and police files tracking his activities during the War of Independence, are to go under the hammer next week at Bloomfield Auctions in Belfast.

“I have written to Minister Martin to suggest that the State should consider the purchase of these items.

“There would be no better place for them to be housed than in Michael Collins House, a museum in Clonakilty dedicated to the Irish patriot, where they could be displayed fittingly in the county where he was born and tragically killed at the age of 31.

“As we enter the year of the 100th anniversary of the death of General Michael Collins, there is renewed interest in the man and the unique and powerful story of his life.

“I believe there is huge benefit in having these items in public ownership given they are an integral part of our history and should be available for all to see.

“Michael Collins is such an important historical figure and a legend in so many ways, particularly in Cork, and we must do everything we can to maintain his legacy and reputation.

“The purchase of these items on behalf of the Irish people would be a fitting gesture as we approach the centenary of his death in August 2022 and I have asked that this proposal be given due consideration,” Senator Lombard concluded.

Often referred to as ‘The Big Fella’, Michael Collins is a key figure in Irish history

The auction will be on Tuesday 28th & Wednesday 29th September 2021 beginning at 1pm on both days. Bidding is available at www.bloomfieldauctions.co.uk, by clicking on the ‘Bid Live Now’ tab.