East Cork’s Proinsias Ó Tuama has been unveiled as the MACE Community Environmental Unsung Hero in recognition of his tireless work in cleaning up the coastal habitats and beaches around East Cork and the wider community. 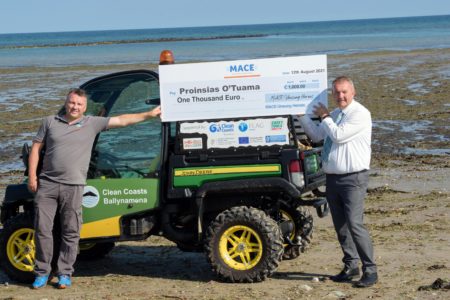 Pronsias O’Tuama pictured on Shanagarry Beach in East Cork where he was presented with a cheque for €1000 by Liam Attridge, Regional Manager, MACE Ireland.
Photo: Don MacMonagle

Proinsias is the driving force in numerous community-based actions in caring for our coastal areas, including the setting up of the now 300 strong volunteer group, Clean Coasts Ballynamona, which he pioneered in 2015.

Proinsias and the group annually cleans in excess of 1.5% of total Irish coastline of marine litter. A teacher in St. Colman’s Community College, Midleton, he also champions the engagement of schoolgoers in these environmental endeavours and also manages 34 acres of habitats for biodiversity through the foundation of East Cork Biodiversity Networking Programme (ECBNP). He is a recognised expert on topics of Marine Litter and Biodiversity and regularly gives talks and seminars to interested community groups and businesses. Proinsias was nominated as part of the MACE Unsung Hero initiative, which aimed to identify and celebrate someone who really went over and above to give something back to his or her community and he received a cheque for €1,000 in recognition of his incredible work.

The MACE Unsung Heroes initiative was launched by Ireland rugby star Johnny Sexton to stimulate community spirit and recognise true local heroes like Proinsias in communities all around Ireland.

Commenting, MACE Sales Director Daniel O’Connell said, “What Proinsias has achieved for the coastal region in East Cork and beyond is truly inspiring. I am awestruck and full of admiration for his commitment and achievements. He truly embodies all that we look for in our heroes and I cannot think of anyone more deserving of this acknowledgement.”

In total, MACE presented 5 category Unsung Hero community awards with each individual category winner being rewarded with cheques for €1,000. An overall MACE Unsung Hero Community Award winner was also selected and presented with a cheque for €5,000.