Cork City FC have confirmed that Paul Farrell will continue as the club’s Women’s First Team Manager for the 2022 season.

“Paul stepped in midway through last season at a difficult time and he has steadied the ship. We spoke and we felt it was important to make a decision early to give him a chance to plan properly for next season. We are expecting the fixtures to be announced before Christmas and we are looking forward then to building momentum towards the 2022 season. We all know that there was a fantastic, record-breaking crowd at the last game of the season, and the players and staff are hungry for more of the same in 2022! We had a lot of positives in 2021, such as Jackie Lennox’s coming on board as the main sponsor of the team and the move into Turner’s Cross, and we want to build on that now next year.” 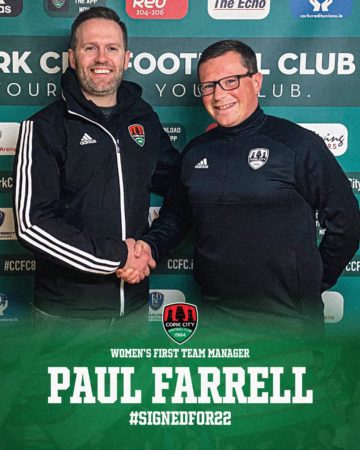 Paul Farrell spoke of his thoughts on taking the role on a permanent basis: “I am really delighted to be staying on in the role for 2022. I am hugely looking forward to working with a great bunch of players, great staff and a great set-up at Cork City.”

“We brought in a few players during the season and they have done very well, and there are more players who we have been keeping an eye on with a view to next year as well. We just want to try and build the squad back up again; they are quite a young group and they will have learned a lot from quite a difficult season last year.”

“There is great work being done at underage level and the players are coming through all the time, so we want to continue that. The Under 17s have had a fantastic season and we look forward to those players coming up through the ranks at the club and continuing the progress that they have already made.”

“The girls really enjoyed playing in front of such a big crowd on the final day of the season and we have to thank everyone who played a part in making that happen. We have had some good performances last season, we just want to do that more consistently and climb up that league table.”