The Port of Cork has welcomed the biggest ever car carrier to its port, further evidence of its enhanced positioning as a key gateway for international trade and as an attractive option for shipping companies impacted by the congestion crisis currently plaguing ports across Europe.

Port of Cork facilitated the vessel, partnering with global shipping company EUKOR, to ensure the supply chain and distribution of new cars for sale in the New Year was not impacted by congestion, and the associated costs incurred, at other ports. 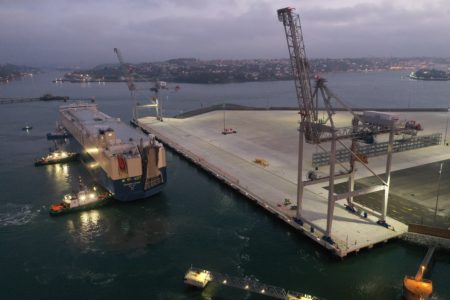 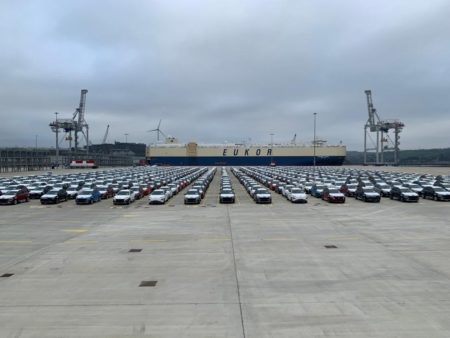 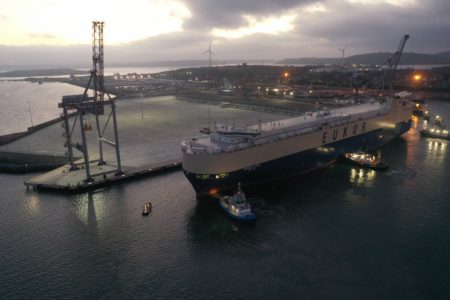 Had the Port of Cork not stepped in, the vessel, which began its journey in Korea, would have had to deliver the 682 vehicles bound for Ireland to Rotterdam from where they would have had to be shipped across separately at a later date, not only increasing the carbon footprint but also adding a significant delay to distribution to customers.

The enormous ‘Morning Laura’ ship, with a capacity to transport 8000 vehicles, docked in the port for approx. 8 hours on Sunday, December 19th. It is the first ship to have docked at the Port of Cork’s new deep-water berth in Ringaskiddy, a key development earmarked as a key enabler for growth for the port.

The 682 vehicles, of which nearly 40% are Electric Vehicles from manufacturers such as Hyundai, Kia and Ssangyong were delivered to Cork from the ship which began its journey in Korea before it stopped in Morocco, Italy, Spain and the UK before Cork.

Conor Mowlds Chief Commercial Officer, Port of Cork stated: “This is further proof of the Port of Cork’s ease of access as a trade route to Europe and beyond and we look forward to maintaining and building on this new relationship with EUKOR into the future. We were very pleased to be in a position to accommodate their vessel and to play our part in maintaining the supply chain, particularly at this pivotal time of year for car sales, dealerships and indeed new car customers across Ireland. “

Ken Behan, General Manager for EUKOR’s Ireland partner- Interliner Agencies limited added: “EUKOR and our own agency believe that nothing is impossible, which fortunately is a belief we share with the Port of Cork who pulled out all the stops, at short notice, to accommodate our vessel and the delivery of over 680 vehicles to Ireland over the weekend. The ease and efficiency, in terms of access and logistics, offered by Port of Cork made it economically attractive for a quick turnaround which is a key priority in our industry.”

The Port of Cork has been managing an exceptionally high and increased level of activity and trade, with over 650k tonnes (on average) of cargo and freight traffic through its port over the last four weeks. This demonstrates further proof of its positioning as a key gateway for trade.

EUKOR’s car carrier added to the Port of Cork’s existing customer base for car carriers which includes the twice weekly call of cars and freight from Grimaldi, all of which are stevedored by Ronayne Shipping.