Friday the 13th may be unlucky for some but not a EuroMillions player in Co. Cork who scooped the EuroMillions top prize of €500,000 in last night’s draw.

The National Lottery have now called on players in Cork who purchased their tickets at Coleman’s Centra store in Millstreet to check their tickets to see if they are the winner of this incredible prize. The winning Normal Play ticket was sold on the day of the draw at the family run store in Cork.

Mary Coleman who runs the family Centra store with her husband, John was overjoyed to hear about one of her customers winning the prize worth a half million euro, “There will be massive celebrations in Millstreet today, that’s for sure. This is our third big EuroMillions win – we sold a €9.6 million EuroMillions ticket in 2006 and another €500,000 win on this very day (14th May) way back in 2010. It’s great to be known in the town for big wins like this so we’re going to enjoy the celebrations that a big win brings for our customers,” she said.

“It’s a popular store within the town for locals and we also get a lot of passing trade given our location. The store itself is 25 years old this year and we have a garage where we sell cars and tractors so the winner could literally be anybody. We’re thrilled for them, whoever they are and we wish them every bit of luck with their win,” she added.

In addition to Friday night’s EuroMillions Plus win, another player in Galway matched five numbers in the main EuroMillions draw to win a prize of €23,376. The winning Normal Play ticket was sold at the popular No. 10 store on Quay Street in Galway City on the day of the draw. 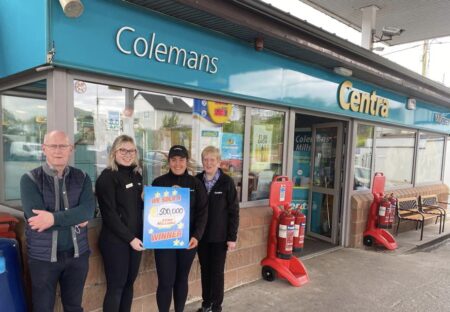 Photo Caption: John & Mary Coleman (far left and far right), owners of Coleman’s Centra store in Millstreet, Co. Cork celebrate with staff after they sold the winning ticket which won the top prize of €500,000 in Friday night’s (13th May) EuroMillions Plus draw.

Both of last night’s big EuroMillions winners are advised to sign the back of their tickets and keep them safe. The winners should contact the National Lottery prize claims team on 1800 666 222 or email claims@lottery.ie and arrangements will be made for them to claim their prize.

Mole clinic to open at Penrose Wharf, Cork City Centre
Previous Post
Man shot in Cork, at 4 in the morning