Balllinadee is a village in County Cork. It lies in the parish of Courceys, approximately 12 km by road west of Kinsale

Mayor of the County of Cork, Cllr Gillian Coughlan has congratulated the Ballinadee Community Hall Development Association on their recent at win in the Population Category 0-300 at the 19th annual IPB Pride of Place Competition in association with Co-operation Ireland.

Kilworth were also awarded runner up in their category of Population 1,000–2,000 at the Awards ceremony which took place in Killarney on Monday 16th May.

Balllinadee Community Hall Development Association was formed in 2016 to reopen the derelict village hall. The hall was originally built in 1954 by the local Muintir na Tire group on land donated by a local farmer.  The committee liaised with the wider community, local groups, Councillors and Cork County Council together with fundraising tirelessly as well as availing of Leader Rural Development funds which were supported by SECAD and Cork County Council grants.  The newly restored hall opened in 2019 and became once again a hub for local groups including Foróige, dancing, music, sports, drama groups, meetings, markets and a social space for the community at large.  The judges were impressed at how ‘the refurbishment of the derelict hall breathed new life into the community, it was clear that this group has built an incredible community spirit, an excellent communications strategy and an effective engagement approach with business and other stakeholders alike’. 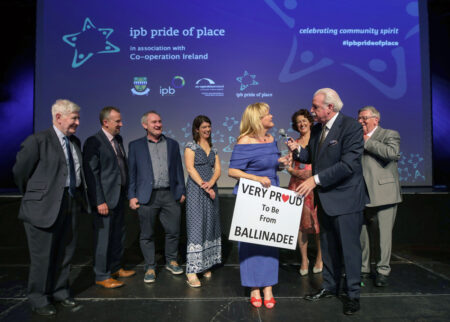 Ballinadee, Co. Cork Winners of the Pride of Place, community population Under 300, with, Broadcaster, Marty Whelan, Christopher Moran, left, Chairperson of Co-operation Ireland and George Jones, Chair of IPB Insurance. Pride of Place, is an all-island competition that acknowledges the work that communities are doing across the island of Ireland. The competition focus is about people coming together to shape, change and improve daily lives in their communities. Photo: Valerie O’Sullivan 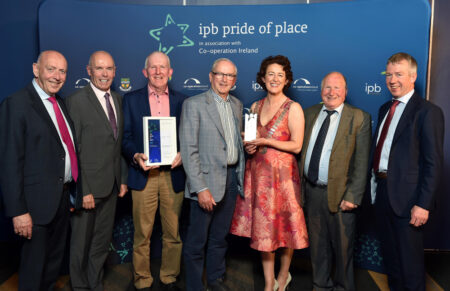 Sponsored by IPB Insurance, the popular Pride of Place competition, run by Co-operation Ireland in partnership with Cork County Council and other local authorities, acknowledges the work being done every day by communities all over the island of Ireland.

Mayor of the County of Cork, Cllr Gillian Coughlan attended the award ceremony and said “This is such a well-deserved win for Ballinadee, and for the dynamic and energetic community who take huge pride in their beautiful locality. My congratulations go out to all the communities from around the county nominated this evening. They have all, without exception, demonstrated dedication, community spirit, inclusiveness and pride of place and a very real commitment to working collaboratively with the Council.”

Chief Executive of Cork County Council, Tim Lucey commending the competition, saying “The high standard of competition and the achievements of the nominees, recognised at the IPB Pride of Place Awards, demonstrate the potential for local communities around the county to foster productive partnerships with Cork County Council.”