PRIVATE PROPERTY: Your chance to visit the Old Head of Kinsale working Lighthouse

Entertainment: Things to do near Kinsale 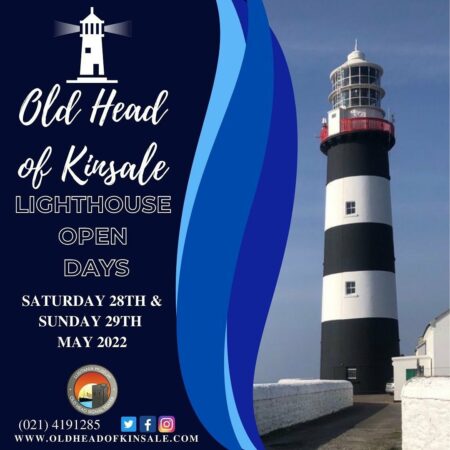 It has been confirmed that the always popular Old Head of Kinsale Lighthouse Open Days are back this year. Make the most of this unique opportunity to visit the Old Head Lighthouse, usually off-limits to the public, and take in the breathtaking views from the top. The nearby Signal Tower Cafe will be open throughout the weekend, with refreshments also available at the Lighthouse Grounds.

Mark your calendars for the last weekend in May:

Parking will be available at the Old Head Signal Tower – no vehicles/walkers will be permitted through the private Golf Course, which is adjacent to the lighthouse. Disabled access to Lighthouse Grounds by request. Guide Dogs Only.

No need to pre-book, just show up on the day. Please note however the Old Head Lighthouse Open Days always generate considerable interest – organisers strongly recommend you arrive early to avoid disappointment. These open days, kindly permitted by the Private Old Head Golf Links and Commissioners of Irish Lights, are important fundraisers for the development of the Old Head Signal Tower & Lusitania Museum.

Old Head is one of the major lights on the South coast and also serves as a guide to the entrance of Kinsale Harbour. The official page on the CIL website provides some historic details:

Whilst there are references to a lighted beacon on Old Head dating back to early and pre-Christian times, the first lighthouse proper, the building of which is still in situ, was one of six erected around the Irish coast by Sir Robert Reading under letters patent granted to him by Charles II on 13th November 1665. The cottage type lighthouse (a design unique to Ireland) had an open coal-fire in a brazier or chauffeur on its roof.

On 18 November 1703 a petition from the Soverign Burgesses and commonalty of Kinsale was presented to the House of Commons looking for the reinstatement of the light which had been unreasonably discontinued for upwards of 20 years. One can presume the petition was successful because of the existence of a lease between Lord Kinsale and Mr J. Steele, Collector of the Port of Kinsale, covering the lighthouse and one acre of land (Irish plantation measure or 1.6 acres statute). Also, in 1774, an account by Dr Smith on the County of Cork says “… having upon the top an excellent lighthouse.”

During 1804 the Revenue Commissioners, who were responsible for lighthouses around the Irish coast outside the Port of Dublin, instructed their lighthouse contractor, Thomas Rogers, to construct a temporary six foot diameter lantern with twelve oil lamps and reflectors to replace the coal fire on the roof.

In July 1812, (two years after the Corporation for Preserving and Improving the Port of Dublin had taken over the fourteen coastal lighthouses from the Revenue Commissioners) George Halpin, Inspector of Works and Inspector of Lighthouses, reported the poor state of the temporary light and stated that it should be replaced by a more permanent building and suitable light apparatus. Three months later sanction was obtained to build a new lighthouse. Its design was similar to the new lighthouse under construction at Baily, Howth Head, that is a forty two foot (12.8m) high tower with a concentric Keepers’ dwelling around its base. The new lighthouse was designed by the Inspector and built by the Board’s tradesmen at a cost of almost £9,500. The fixed white light was established at a height of 294 feet (89.6m) above high water on 16 May 1814. The light comprised twenty seven Argand oil lamps each with its own parabolic reflector and in clear weather it could be seen at a distance of 23 miles (37.0km). The tower and outer wall of the dwelling were whitewashed, thus making the station conspicuous during daytime.

Subsequent to a general lighthouse and lightvessel inspection by the Elder Brethren of Trinity House in July 1843, they reported seven months later that Old Head with Cape Clear was too high and often obscured by low cloud. They suggested removing the station towards the point of the headland at a lower level. Inspector Halpin, who had accompanied the Elder Brethren on their trip agreed, duly visited the proposed site and reported favourably to the Board in April 1845.

Statutory approval from Trinity House was obtained on 26 February 1846 and an inquisition was held in Kinsale on 4th October 1846 to determine the value of the ground required for the new lighthouse premises. A value of £100 was placed on the 7 acres, 5 perches including a right of way to the lighthouse site.

The complete station was designed by Inspector George Halpin and constructed under his supervision by tradesmen of the Board. He marked out the site on Wednesday 20 March 1850 having travelled to Kinsale the previous day using the facilities afforded by railway communication! Fifteen months later the tower was at the 60 feet (18.2m) level, dwellings were at the halfway stage and the compound wall was almost complete.

By 1853 the new station was finished at a cost of £10,430: 3s: 7d. The fixed white light at a height of 236 feet (72m) above high water was established on 1 October 1853. The light source was a multi-concentric wick oil lamp at the focus of a first order dioptric lens with a range of 21 miles (33km). It was visible from Charlesfort in Kinsale Harbour seaward to Seven Heads. The 100 foot (30.5m) cut stone tower was plastered on the outside from ground to balcony level and painted white with two red bands. The colour scheme was changed to black with two white bands during the summer of 1930.

When the new light was established the 1814 light was discontinued and its tower was reduced in height so as not to give the impression during daytime of a lighthouse. The stones removed were set aside for constructing the Horse Rock Beacon in Courtmacsherry Bay.

Early in 1854 Lord Bernard of Castle Bernard, Bandon, Co. Cork enquired why, since the new light was established, Courtmacsherry Bay was without a light. Inspector Halpin explained in his report to the Board that the new light was a sea light and was not intended to guide vessels through the rocks and shoals of Courtmacsherry Bay; also if the latter was required a local light on Land Point would suffice. Lord Bernard also directed his enquiry to the Board of Trade in London as a memorial from the Grand Jury of the County of Cork. George Halpin reiterated his remarks this time to their Lordships who later in May suggested two forms of red sectoring over the bay. Whilst the Inspector still defended his reason for not lighting the bay from Old Head stating also that the non-lighting gave an unmistakable warning to mariners, he did agree to having a red arc covering the bay with a dark sector across the entrance. The Board of Trade compromised with a red sector between Seven Heads and Horse Rock and white to the north of the sector into the bay. The change was effected from 16 April 1855 and remained until the light was converted to incandescent flashing in December 1907 with a character of Gp Fl (2) W ev. 10 secs.

Towards the end of 1890 Inspector Captain Boxer recommended a fog signal for Old Head and Sir Robert Ball, Scientific Advisor to the Commissioners, was asked to report on the best light. Sir Robert’s recommendation was for the introduction of electricity. This was referred to the Board of Trade along with a proposal for a ten wick oil burner from the Commissioners’ Engineer, Mr William Douglass. Their Lordship would not commit themselves until Trinity House had given their sanction. By March 1891 the Elder Brethren stated they had no practical experience of a ten-wick burner where red and white light was involved but they recommended an eight-wick burner. During the following month the Inspecting Committee stated that Trinity House should be informed that the divergence in the red sector would be slight and requested sanction for a ten-wick burner. Reluctantly the Elder Brethren gave their sanction adding they could not justify the large expenditure on electrification. The Board of Trade sanctioned the cost of the burner which went into operation in September 1892.

Three cannons were installed and established as a fog signal on 1 February 1893. Two successive reports were fired every ten minutes. A third Keeper or Fogsignal Man was appointed to the station who was at first in lodgings until another dwelling was built for him in 1895.

The Mercantile Marine Service Association in Liverpool wrote to the Commissioners in January 1903 enquiring whether they contemplated altering the obsolete low powered light at Old Head Kinsale. The enquiry was referred to the Inspecting Committee who, after almost two years, reported that sanction from Trinity House should be obtained to change the light to double flashing, incandescent vapourised paraffin and substitute cotton powder charge for the gun fog signal, altering the character to two successive reports every six minutes.

Variations were considered, such as positioning the new lantern at the base of the tower, reducing the height of the tower and a new position on the head for the tower but the end result was the existing lantern and granite blocking to be removed and replaced by the present iron lantern. Two small temporary semi-circular lanterns were attached to the outside of the tower whilst the new lantern optic revolving apparatus and fog signal were being installed. The new light and fog signal were established on 17 December 1907. William Spence of Dublin supplied the lantern, fog signal jibs and apparatus; Chance Brothers of Birmingham the bi-form first order optic; and David Brown of Lockwood, Leeds the clockwork optic rotation machine. The red sector over Courtmacsherry Bay was discontinued.

The character of the explosive fog signal was changed to one report every five minutes from 1 June 1934. From 1971 each explosive report of the fog signal fired during the hours of darkness was accompanied by a brilliant flash of light. When all explosive fog signals around the coast were discontinued in 1972, Old Head acquired the siren fog signal from Poer Head Fog Signal Station (which had been discontinued in 1970) with a character of three blasts every forty-five seconds. The siren was replaced by an electric horn with the same character in December 1985 and controlled by a videograph fog detector. The fog signal was permanently disestablished on 11 January 2011.

The light was converted from vapourised paraffin to electric on 25 April 1972 with a standby generating set in case of mains electricity failure. The intensity of the light was increased giving a range of 25 nautical miles. At the same time the duration of the flash was decreased to 0.15 seconds. From 1978 the light has been exhibited in conditions of poor visibility. The range of the light was reduced to 20 nautical miles in October 2005.

When the Daunt lightship was withdrawn a radiobeacon aid to navigation were established at Old Head on 28 August 1974 transmitting its Morse identification signal OH in a character lasting five seconds once every six minutes. Old Head was grouped with beacons at Ballycotton, Lundy (Bristol Channel), Flatholm (Bristol Channel), South Bishop (off St. David’s Head, Pembroke) and Tuskar, with the timing of transmissions sequenced from each in turn. Sequencing of radiobeacon transmissions was discontinued from 1 April 1992. In more recent times utilisation of radio direction finders by mariners has been superseded by more modern technology. For this reason the Commissioners discontinued their Medium Frequency Radiobeacon service on 1 February 1999.

On 1 April 1987 the Old Head of Kinsale Lighthouse was converted to unwatched automatic operation, the Keepers were withdrawn and the station is now in the care of an Attendant.

In January 2009 AIS (Automatic Identification System) functionality was added to the station.

AREA: WEST CORK, ENTERTAINMENT, NEWS
Improvement works for the Banduff Road
Previous Post
Why wasn’t the Irish version of ‘Deal or No Deal’ a hit?
Next Post
Tweets by @TheCork_ie