Alpha Automation & Controls, the Cork based automation solutions provider, has announced plans to double its workforce over the next three years following a move to new state of the art premises in Carrigtwohill which were officially opened recently by the Minister for Foreign Affairs & Defence, Simon Coveney TD.

Founded in 2017, the company focuses on the delivery of customised industrial automation solutions to companies in the pharma, food and beverage, and manufacturing industries in Ireland and the UK with customers like Johnson & Johnson, MERCK, Kerry Group and Irish Distillers.

Success beyond those key markets has been achieved in recent years and Alpha Automation & Controls has delivered significant projects in Portugal, Denmark, and the US. 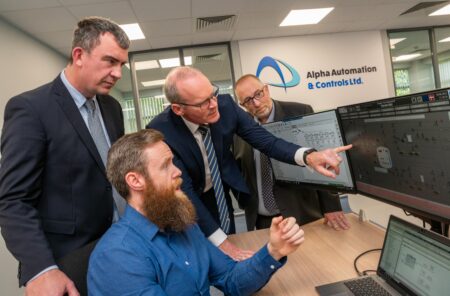 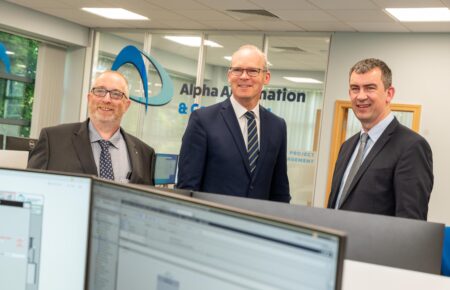 Speaking at the opening of the company’s new premises Minister Coveney said:

“Alpha Automation & Controls is a great example of the homegrown companies which form the support backbone of Ireland’s global life sciences and other process industries. Global leaders in these sectors, from pharmaceutical to food, are reliant on Irish suppliers like Alpha Automation to provide them with the world-class services they require.”

“Now Ireland’s services sector is playing an increasingly important role in our export success. By becoming the supplier of choice for global companies based here, Irish companies like Alpha Automation & Controls are now winning valuable contracts across Europe and helping to spread the message about Ireland’s world class capability.”

“Alpha Automation & Control’s success is translating into new high-quality engineering jobs and the company has plans to double its workforce from 30 to 60 over the next three years now that it has the space to accommodate the people in its new premises. I would like to congratulate all concerned on what is a tremendous story of achievement over the past five years and wish them every success in the future.”

The business was established by experienced industry operators, Richard Stapleton and William Fitzgerald, who are leading the business in the roles of Commercial Director and Operations Director respectively. That success has led to the company outgrowing its original premises and requiring the move to new 5,000 sq ft office in Carrigtwohill.

“We’re delighted to be in a position to add to our headcount and officially open our new premises as we plan for significant expansion over the next three years. Our ability to do this has been largely down to the great success we’ve had here in Cork which has led to further success on export markets in the UK and beyond. We’re looking for ambitious graduates and experienced engineers to join our team. Our new office space and larger workforce will help us strengthen our service offering and scale up to secure more contracts across Europe and the US.”