Nearly 820 children at five schools in Co. Cork were recently visited by a mobile science lab run by science and technology company Merck.

The Curiosity Cube visited five schools in the county – Scoil Mhuire Naofa and Scoil Chlíodhna in Carrigtwohill, St Mary’s & St Joseph’s and Bunscoil Rinn an Cabhlaigh in Cobh, and Gaelscoil Mhainistir Na Corann Baile in Midleton—as part of a 70-stop European tour that will also include Belgium, Denmark, France, Germany, Liechtenstein, the Netherlands, Spain, Switzerland and the U.K. 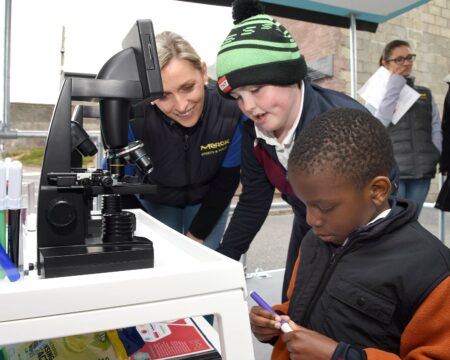 The Curiosity Cube is the brainchild of Merck and it aims to engage students in science, technology, engineering and mathematics (STEM) learning by teaching them about aspects of STEM they may not have known about. The Curiosity Cube® also allowed the children to conduct hands-on experiments with Merck’s own team of scientists.

The number of people working in STEM careers grew three times faster than the total employment in the EU last year, according to the EU STEM Coalition. This growth in jobs means there is an urgent need to start training up the next generation of scientists to fill this pipeline.

This tour of Cork schools also comes days after Merck announced it is investing €440 million in two manufacturing plants in Co. Cork that will bring 370 new jobs to the area.

Clár Ní Néill, 5th class teacher at Gaelscoil Mhainistir Na Corann Baile in Midleton, said: “It was such a hands-on approach to teach the science curriculum and a unique opportunity for the students to get to see all the equipment and explore concepts that we might cover in schools sometimes, but in just a much more interesting way.”

Sadie de Róiste, STEM Coordinator at Gaelscoil Mhainistir Na Corann Baile in Midleton, said: “Today, students have been able to go outside, get involved and engaged in an immersive, interactive, child-orientated, small-group approach learning initiative. Each of those groups is learning something new, something different and they’re moving on, and they’re doing it in a positive, interactive way.”

Allan Murray, Senior Analyst at Merck, who volunteered at the Curiosity Cube® shared his experience: “My colleagues and I have really enjoyed interacting with the students and teaching them about science. They were so enthusiastic to learn all about the microbiome!”