In the hills surrounding the Cork and Kerry county bounds, the gravel lanes of the Moonraker Forest Rally provided a never-ending series of dramas that ensured that the 3rd Round of the 2022 Motorsport Ireland Forest rally Championship will live long in the memory, and will be a fondly remembered victory for Keith Cronin & Mikie Galvin. 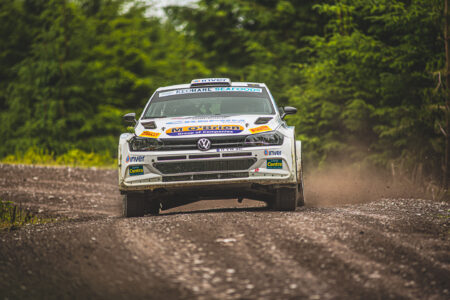 Across a day that included eight high speed tests and a never-ending series of weather changes, any early advantage earned would be important, and from the very off Patrick & Stephen O’Brien, winners last time out in Carrick-on-Suir, were setting the pace in their Skoda Fabia R5, but by the time the crews completed the 2nd stage, only half a second separated O’Brien and Cronin, the young gun leading the incredibly experienced Ballylickey star.
Stage 3 would prove eventful, where an error by O’Brien saw the front of his Skoda damaged and he would lose the lead of the rally as Cronin, making his Gravel debut in a VW Polo GTi R5, took full advantage.

The same stage, although only 5.2km in length, would catch out 2WD Championship Leaders John Gordon & Ben Taggert when they lost a tyre and had to pull in and change the flailing alloy near the end, losing several minutes. Gordon wasn’t the only 2WD Championship contender to hit trouble, as both David Condell & Greg Shinnors and Adrian Hetherington & Gary Nolan retired their Ford Escort MK2’s on the first pass.

As all around them faltered, the Moonraker Rally will most definitely be remembered for some incredible driving from the FWD cars, with many swapping seconds all day with the RWD runners. Chief amongst the days giant-killing were Kyle McBride and Darren Curran, the 2019 J1000 Champion lying 2nd in the 2WD battle at the half way point, before an issue on Stage 5 would see him drop back.

While McBride was unlucky, another rising star was ready to pounce and put one of the most experienced Championship competitors under pressure right through the afternoon. With a lot of his rivals out of the way, Cavan’s Micky Conlon & Paul McPhillips marched to a well-deserved 2wd victory in their Ford Escort MK2, but the final 13.6 second victory was a result of the incredibly charge by Ryan Cadwell & Grace O’Brien on the final stages. What is even more remarkable after a days rallying and nearly 62km of high-speed gravel rallying, is that Cadwell & O’Brien only had 1.6 seconds to spare over Brendan Cumiskey and Dylan Doonan in an identical Ford Fiesta Rally4 who rounded out the podium.

As the morning’s showers died away, the pace at the front by Cronin really strengthened, and he began to edge ahead bit-by-bit as the stages progressed. The same looked to be happening in the hotly contested Junior 1000 series, as stage after stage saw Jack Brennan & John McGrath build a bigger lead in their Skoda CitiGo, but luck can depart quickly in Rallying, and the final stage would see Brennan lose nearly 4 minutes, and with it, the lead.

Ready to pounce was Mossie Costello & Tom Murphy, the Tralee youngster driving incredibly all day and rewarded with a first ever victory in his Peugeot 107. The time loss for Brennan would see the rest of the field bumped up, with Tommy Moffett & Gary McCrudden taking a brilliant second place while Danny Brady & Gary Kiernan rounded off the podium.

As the stage miles ticked down, no matter what Patrick & Stephen O’Brien tried, they just could not match the pace of Cronin and Galvin, and in a shakedown before next weekend’s Nicky Grist Stages, the pair romped home to take the Moonraker Forest Rally victory by 43.5 seconds. Niall McCullagh & Ryan McCluskey rounded off the podium with a great drive to third in their Ford Fiesta Rally2.

A fourth-place finish for Jordan and Paul Hone sees them retain the lead of the Motorsport Ireland Forest Rally Championship as we head next to Mallow and the Jim Walsh Cork Forest Rally on August 14th.

Lastly, one name missing from the entry list on the Moonraker Forest rally was Championship stalwart Shane McGirr, both he and his Toyota Starlet were needed elsewhere as he married Jackie. On behalf of the whole Forest Rally family, we wish them both a healthy and happy life together!

Related content:
Speaking of ‘Moonraker’ reminds us of the theme tune from the 1979 James Bond movie of that name. The track was sung by Dame Shirley Bassey