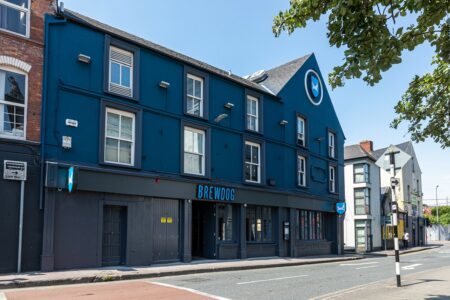 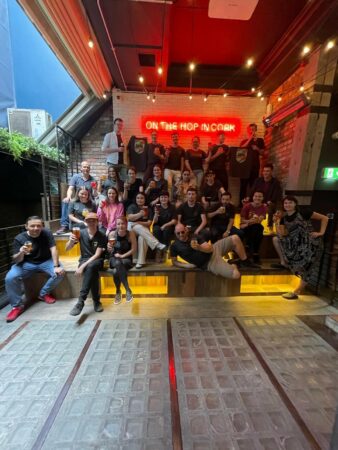 Anticipation has been building for some time now since the announcement that a BrewDog Cork bar would open its doors in summer 2022.

On the site of the former Grand Central Social on Courthouse Street, just off Washington Street, the new bar, which has had extensive renovations, will open its doors today – Friday 22nd July 2022.

With the unmistakable blue hue and the iconic logo, it is BrewDog, but it is not necessarily the BrewDog that many Corkonians are expecting. On Leeside, it is necessary to put your own local stamp on things for authenticity and BrewDog is firmly and proudly a Cork-owned bar. Westside Leisure Ltd has been operating bars and clubs in the city for the last 40 years including some of Cork’s most iconic watering holes, including the Bróg, BarBarossa, Voodoo Rooms, Popscene, Alibi and BarBarella.

Currently, the group employ almost 200 team members across these six venues. With BrewDog Cork as their seventh venue, the new bar will offer 30 beers on draught, including rotating and seasonal taps from Irish breweries.

Speaking about the decision to bring the BrewDog franchise to Cork, and what it will add to their existing offering of bars, Co-Director Tony Forde said:

“Having visited many BrewDog venues over the years (especially on Munster Rugby away games), we have always been impressed by their bars. The first lockdown of Covid in 2020 left us with some time on our hands so we decided to reach out.

“Bringing the BrewDog bar to Cork has been the accumulation of almost two years of lockdown zoom calls, back and forth emails and finally, face-to-face meetings and handshakes. With the help of the BrewDog designers and support team, we have completely transformed the venue into a Craft Beer emporium.

The new bar, open 7 days a week, will employ over 50 people and will include a large kitchen serving burgers and wings as well as great vegan and salad options. The reaction has been hugely positive since the announcement was first made earlier this year, the enquiries have been pouring in and even during the current nationwide staffing crisis, the recruitment attracted a huge response, especially attracting people who know and love the brand. ‘We want to make the Cork BrewDog one of the best in the world,” Mr Forde added.

Recounting their business journey over the last forty years, Mr Forde said the below:

“We began with the latter days of DeLacy House on Oliver Plunkett Street, a powerhouse venue in the 80s live music scene. As the 80’s moved into the 90’s, Irish culture was also on the move and so Gorby’s nightclub was born. Lasting for 20 years, Gorby’s was an Iconic alternative music club – not disco, that attracted generations of Cork students until it finally grew up and transformed into The Voodoo Rooms in 2013.

On the ground floor of the Oliver Plunkett Street complex is An Bróg which has enjoyed even greater longevity. Although it has changed and evolved through the decades, An Bróg continues to be popular as ever, the once small and intimate watering hole, has grown into a large late-night venue open seven nights a week. Opening in 1992 – it will have its 30th anniversary later this year – something we will be celebrating – so watch this space!”

Next door is BarBarossa, popular for cocktails and parties, while upstairs is Popscene – Cork’s only dedicated 80s and 90s bar, which recently reopened after a 2-year Covid-hiatus.”

“BrewDog Cork’s opening will be significant for us as our seventh venue in the city. Cork’s craft beer scene is long-established, and we have incredible local producers that we will also showcase in our bar. There is a huge focus on food at BrewDog bars, and with so much incredible local suppliers close by, we will be using local produce where possible. We feel it will be a welcome addition to the city. Using our experience in developing venues that have enduring popularity, we look forward to putting our own unique stamp on the BrewDog brand.”