A Cork teen has followed up her 2021 Technovation award by creating a brand new app that has bagged her the Junior Regional Award for Europe at Technovation, a global competition for girls to create apps to solve problems within communities. 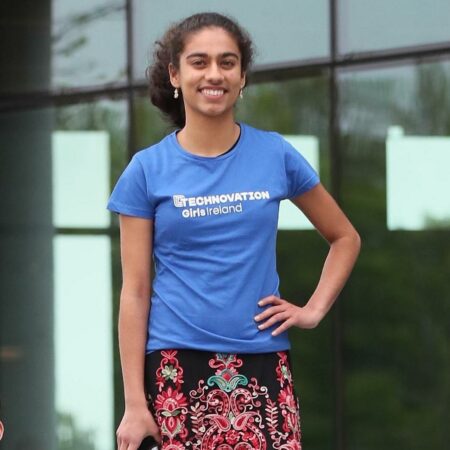 Saanvi Kaushik (14) from Cork City, and a student at Christ the King Secondary School, won a global award at Technovation 2021 for her Stellar app that helps patients access occupational therapy services. Not content with that achievement, she set about creating a new app and which has been recognised by the panel of judges.

The Climattain app aims to inform, encourage and empower young people to take daily climate actions to positively impact their own carbon footprint and improve the world’s environment with each act. Users can log their activity, create challenges for other users and are rewarded for their positive behaviours.

The global climate crisis provided an inspiration for her app but Saanvi had more personal reasons to try and make a difference. “I have not been able to visit my grandparents in India due to the huge levels of smog and pollution. Today, seasons don’t really exist in India and it’s extremely hot all year around. My grandparents also say that it does not rain as often as it used to. Every individual must take responsibility and act against climate change. I developed Climattain with the aim of providing such a platform.”

Saanvi was able to develop the app with the help of charity Teen-Turn, which works to tackle the low number of women from under-served areas and under-represented communities who are attaining third-level qualifications in STEM.

“Teen Turn helped in many ways. They guided me through the process as there were sessions every week which also motivated me to keep working on my project. The Teen Turn mentors also helped me solve problems and answered any questions I had throughout the process.”

Being recognised as the Technovation Junior Regional Winner for Europe, beating competition from 5,500 girls from 61 countries and 1,700 mobile apps you’d be forgiven for thinking Saanvi would rest on her laurels but she has big plans.

“I am working on refining the machine learning models and the content of the app. The current version can be used by students within a school. In the future, I want the users within a class to be able to connect and also be able to join global events. I will fix all the bugs to get the app market-ready and then I will launch it on PlayStore and AppStore.”