The Cork French Film Festival will return to the Gate Cinema this September. Every year, the festival helps to further enhance relations between Ireland and France, our closest EU neighbour, and it opens a window onto the wider French-speaking world through the magic of film.

The festival will be officially launched aboard the Belem, a stunning 126 year old French three-mast ship that belonged to the Guinness family from the 1920s to the 1940s. The Belem will be in Cork on August 30th, five years after its last visit to Ireland.

Eleven films, featuring some of the greatest Francophone film directors and actors, will be shown at the Gate Cinema during the four-day event.

Some of the new and highly acclaimed films that will be shown are Full Time (À Plein Temps); The Crossing (La Traversée); France (with French actress Léa Seydoux); Authentik (Suprêmes); Playground (Un Monde), and Both Sides of The Blade (Avec amour et acharnement) – the new film by Claire Denis which won the Silver Bear at the Berlin Film Festival this year. The festival also includes a tribute to French actor Jean-Louis Trintignant, who passed away in June, with two classic films directed by Costa Gavras – Z (1965) and The Sleeping Car Murders (1969). There will also be a family screening on Sunday September 4th, and a film for post-primary schools will screen later on September 27th. 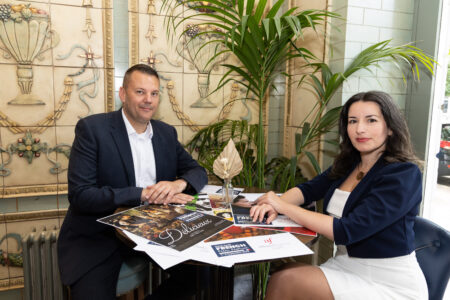 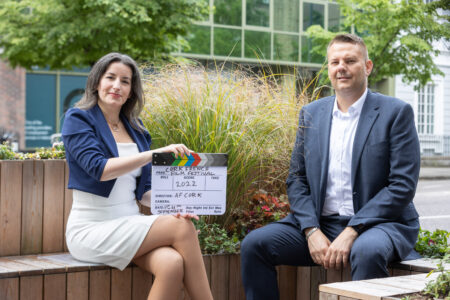 Josselin le Gall and Valérie David-McGonnell launching this years Cork French Film Festival.
The Cork French Film Festival will return to the Gate Cinema this September. Every year, the festival helps to further enhance relations between Ireland and France, our closest EU neighbour, and it opens a window onto the wider French-speaking world through the magic of film.
Photo Darragh Kane 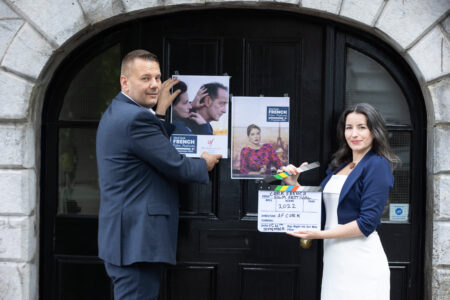 The festival will open with a special screening of the delightful culinary French movie Délicieux, directed by Eric Besnard, with a celebration of French cuisine.

“We are truly delighted that the 33rd Alliance Française Cork French Film Festival is returning this year. This September, we will have some fantastic films from France and Belgium for everyone to enjoy, as well as a drama by Tunisian film Director Leyla Bouzid. This festival is not just for people who love the French language, it is dedicated to all who love cinema, as all movies are subtitled in English. This year, our opening film will also celebrate a very important aspect of French culture: food.”

Honorary Consul of France in Cork, Kerry and Waterford, and Member of the Board of Directors of Alliance Française de Cork, Josselin Le Gall, said:

“We are very proud to once again bring the Cork French Film Festival back to the Gate Cinema. Ireland has very deep links with France and Cork is home to the second largest French community in Ireland. The Cork French Film Festival is one of Munster’s longest-running festivals which attracts large audiences from all across Cork and beyond. We have a packed schedule of movies for all film fans to enjoy. A strong relationship between Ireland and France continues to develop and cinema is an exciting way to promote relations between our two countries.”

The full programme is available on www.corkfrenchfilmfestival.com. Tickets are on sale at The Gate Cinema, and online at www.gatecinemas.com

The programme for the 33rd Cork French Film Festival has been curated and managed by Green Ray Film Agency and the festival has been directed by Josselin Le Gall and Valérie David-McGonnell for Alliance Française de Cork.

Supporting sponsors this year include the Cork City Council / Arts Office, the Embassy of France in Ireland, the Embassy of Belgium in Ireland, Amarenco, Eurotranslations, Cameron Bakery, the Imperial Hotel, and Hegarty’s Cheese. Partners include The Gate Cinema, Institut Français, and the AIPLF (Association Irlandaise des Professeurs de Langue Française).