Three Cork athletes along with 11 others from Dublin, Kildare, Clare, Tipperary, Galway, Clare,  Limerick and Roscommon will participate in The European Transplant and Dialysis Games to be held in Oxford UK from August 21st to 28th. The week-long multi-sports competition is amongst Heart, Lung, Liver, Kidney, Pancreas & Bone Marrow transplant recipients and kidney dialysis patients from over 25 countries.  The Irish team of 11 men and three women consist of 9 Kidney recipients, 2 Liver recipients, 1 Double Lung recipient, 1 Bone Marrow recipient and one on currently Dialysis. Cork will be represented by Charlie Ryan, Mike Keohane and & Amanda Coyne O Neill. 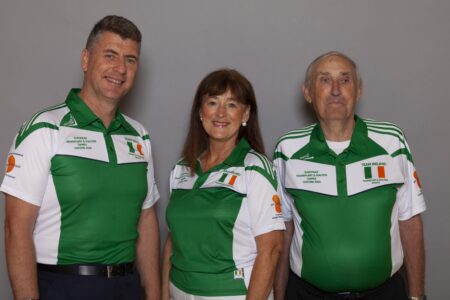 From Left to Right, Athletes Mike Keohane, Rosscarbery, Amanda Coyne O Neill & Charlie Ryan – who will represent Ireland along with 11 other athletes at the upcoming European Transplant & Dialysis Games in Oxford 2022.

Charlie Ryan from Cobh received a Liver transplant in 2007, and joined team Ireland in 2008 going to his first Games in Germany. He has since attended the Games all over the world and enjoys the camaraderie and fun. But like all those in Team Ireland, Charlie honours his donor at each and every Games. Charlie is known as King of the Darts having won the European and World medal in darts for many years. He also plays and has medalled in Petanque and 10 Pin Bowling.  Charlie says “The Transplant Games keep me active and motivated. I enjoy being part of the extended family that is Transplant Team Ireland and I have made lots of friends whom I have met from around the world. I wouldn’t be here today were it not for my donor and their family and taking part in Transplant Sport is my way of honouring and expressing my gratitude to them.”

Mike Keohane from Rosscarbery received a Liver transplant in December 2007, having been ill for many years from a congenital auto-immune condition. A lifelong sports enthusiast, Mike has played football for his local Club Carbery Rangers, his school and the Carbery Teams. He coaches Football and Basketball at Mt St Michael Secondary School Rosscarbery and has also competed in soccer, basketball and rowing.  Mike joined Team Ireland in 2010 at the European Games in Dublin and was hooked from then on. Both Mike and his wife Dee agree that being part of Team Ireland has been a life-enhancing experience – the sense of family and goodwill in the team is inspirational and they have made lifelong friends. He has medalled in the British, European and World Games but like his fellow athletes, Mike competes to honour his donor and the donor’s family. Whilst Mike has competed in Javelin, Archery, Badminton, his main sports are 5K Race-walk, Shot put, Discus & Triples Darts. He has just recently returned from the British Transplant Games where he had Triple Gold success in the 5K Race-walk, Shot put, and Discus.

Amanda O Neill Coyne – from Youghal  – is looking forward to her first Transplant Games experience.  She received her kidney in December 2020 from her ‘wonderful and only sister’ Frances. She will participate in the Team Golf, Golf Singles and the 5Km. Amanda  first heard about the games on social media and immediately was intrigued – and delighted – to change her focus from ‘patient’ to ‘athlete’!

The Team recently had their official Team Kit Launch with Olympian Michael Carruth sharing his advice with Transplant Team Ireland at Kilcullen Community Centre. It was inspirational to hear Carruth speak of his passion, drive and unrelenting ambition to win the Olympic medal, beginning when he was just 7 years old. His advice included ‘don’t give up’ after failure, or when everything seems to be against you and repeated don’t believe naysayers who tell you that you can’t achieve what you want because he proved them wrong. He spoke of his encounter with George Foreman at his first Olympics when things didn’t go so well

But what is really astonishing is that Carruth actually fought his 1992 Olympic final with two broken hands – defeating Cuban boxer Juan Hernandez Sierra and taking home Ireland’s first gold medal since that won by runner Ronnie Delaney at the 1956 Games in Melbourne. It was a personal, intimate account of his challenges to the final and one that each athlete present could relate to – the need to believe in yourself, the necessity of good support around you and the driving passion to succeed.

Transplant Team Ireland also fondly remembered members of Transplant Team Ireland who have passed away since the last Games and family members were present to accept a Team Jersey in honour of their loved ones. They were told that this was a loss for the whole ‘transplant family’ and it was poignantly noted that they were to be ‘honorary team members’ in Oxford.

Like all their colleagues in Team Ireland, these Cork athletes compete to honour their donor and the donor’s family.  Transplant Team Ireland stories are inspirational ones – of facing adversity head-on and valuing the most precious gift of all – Life. Team Ireland showcases the success of organ donation and transplantation whilst offering inspiration to those who are newly transplanted or newly diagnosed with organ failure. To keep up to date on Team Ireland’s progress, visit transplantsportireland.ie and their corresponding social media platforms linked from the website.