Cork Orchestral Society makes a welcome return with an exciting program for autumn/winter 2022. They are pleased to announce twelve spectacular shows taking place in venues across Cork city including the Pirosmani Quartet, a star-studded line-up of international musicians lead by Cork violinist Mairéad Hickey on Thursday, October 20 at 7.30pm in Curtis Auditorium.

The Pirosmani Quartet will perform Beethoven’s String Quartet Op.18 No.3, an early work that already bears the hallmarks of the master’s genius; Brahms’ magnificent A minor quartet; and Sean Doherty’s fine ‘Night Piece’, written for Mairead’s Ortús Festival in 2020.

Further concerts include the Kölner Orchester-Gesellschaft conducted by Witolf Werner, presents a tantalising programme featuring Bizet’s colourful L‘Arlésienne Suites; Mendelssohn’s heroic ‘Reformation’ Symphony; and Saint-Saëns’s Cello Concerto No.1 – considered by many to be the greatest of all cello concertos – featuring Cork’s Callum Owens as soloist at 7.30pm in City Hall, Cork on Thursday October 6.

Another concert highlight for October will feature Madrigal ’75 and the Cork Baroque Players as they join forces to perform Handel’s Messiah as part of this year’s East Cork Early Music Festival on October 14. With its joyous arias and rapturous choruses, this awe-inspiring English-language oratorio has been a cornerstone of European choral music since its premiere in Dublin in 1742.

Celebrated Irish violinist Mairéad Hickey is acclaimed for her captivating expression, soaring tone and fearless virtuosity. Her natural ability to communicate sincerely, with beauty and integrity, entrances audiences worldwide. As a soloist Mairéad has performed with the RTÉ Irish National Symphony Orchestra, RTÉ Irish National Concert Orchestra, Hessicher Rundfunk Sinfonie Orchester, Württembergisches Kammerorchester, Philharmonisches, Staatsorchester Mainz, Kremerata Baltica, the Chamber Orchestra of Europe , Camerata Ireland and with conductors such as Christoph Eschenbach in some of the major halls around the world. Her Carnegie Hall debut was described as ‘…magical, penetrating to the heart and soul of the music.’ (New York Epoch Times) Mairéad is the concertmaster of the Orchestre National des Pays de la Loire. 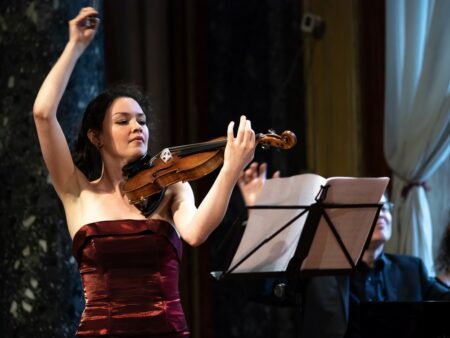 Her love of chamber music led her to co-found the Ortús Chamber Music Festival in 2016 in her native Cork, of which she is Artistic Director. From 2003 to 2014 she studied with Adrian Petcu at the CIT Cork School of Music, Ireland and spent a year in France studying at the Conservatoire de Nantes with Constantin Serban. In 2020 she graduated with a Masters in Performance from Kronberg Academy where she studied with Mihaela Martin, sponsored by the Hilmar Kopper Stipendium.