One of the busiest Coast Guard units in the country is the latest winner of the Cork International Hotel Community Spirit Award. Crosshaven Coast Guard was presented with the monthly award by Minister for Foreign Affairs, Simon Coveney T.D.

Crosshaven is one of 44 Coast Guard units around the coast of Ireland and is made up of volunteers from the local community. The unit is on call 24 hours a day, 7 days a week, 365 days a year. It’s regularly tasked to carry out search and rescue operations both on land and at sea responding to dozens of incidents each year. 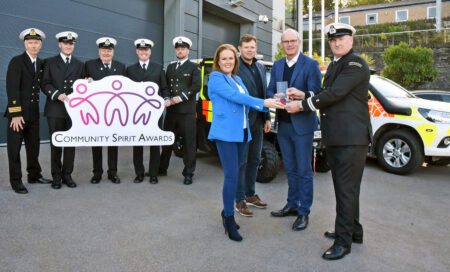 The volunteers also provide assistance during events in and around Cork Harbour and prepare landing zones for the Coast Guard Search and Rescue Helicopters. They operated from a small shed from 1888 until 2013 when they moved into a state-of-the-art facility in the town.

Generations of families have been and remain involved with Crosshaven Coast Guard. The volunteers range in age from 18-years upwards and are all highly trained.

Carmel Lonergan, Director of Group Operations, Trigon Hotels said: “Crosshaven Coast Guard Unit is a vital service for the people of Crosshaven and the wider harbour area. The volunteers are regularly called to serious and life threatening incidents and work tirelessly to prevent the loss of life at sea. They’re also available to help the community during emergency weather situations and gave their time freely to help those in need during the Covid-19 crisis. We received several nominations for Crosshaven Coast Guard Unit and its volunteers in recent weeks which shows the high esteem in which they’re held by the people of Cork.”

Minister for Foreign Affairs, Simon Coveney TD, added, “It is an honour to present the Community Spirit Award to the volunteers of Crosshaven Coast Guard, in recognition of the part they play in life-saving work around the coast and waterways of Cork. I have a long personal association with Crosshaven Coast Guard, and I’m a huge admirer of the work they do and the sacrifices they make. I was honoured to officially open the new Crosshaven Coast Guard station in 2016 and I know the unit is continuing strongly since then. I want to also acknowledge the Cork International Hotel, The Carrigdhoun Newspaper and Gerald McCarthy Gifts & Awards for their continued support of the Community Spirit Awards.”

This is the second year of the award scheme which honours unsung heroes in Cork who are making a significant contribution to their community. The Cork International Hotel Community Spirit Award sees a group or individual chosen every month with an overall winner selected at the end of the year.

The awards are open to community groups and organisations in Cork from first-responders to community centres, victim support services to sports groups and those volunteering in the health and disability sectors.

It is sponsored by The Carrigdhoun Newspaper and Gerald McCarthy Giftware. The judging panel for the Community Spirit Awards are made up of a mixture of representatives from the public and private sector within the community.

Nominations are open now for next month’s award: https://www.corkinternationalairporthotel.com/community-spirit-awards/